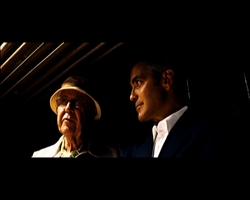 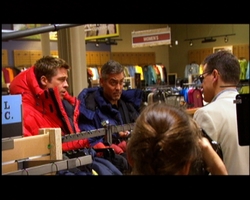 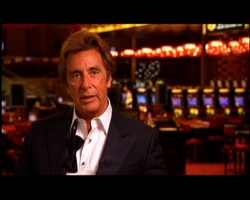 Danny Ocean rounds up the boys for a third heist, after casino owner Willy Bank double-crosses one of the original eleven, Reuben Tishkoff.

Storyline
The last time we saw Danny Ocean's crew, they were paying back ruthless casino mogul Terry Benedict after stealing millions from him. However, it's been a while since they've come back together, which is all about to change. When one of their own, Reuben Tishkoff, builds a hotel with another casino owner, Willy Bank, the last thing he ever wanted was to get cut out of the deal personally by the loathsome Bank. Bank's attitude even goes so far as to finding the amusement in Tishkoff's misfortune when the double crossing lands Reuben in the hospital because of a heart attack. However, Danny and his crew won't stand for Bank and what he's done to a friend. Uniting with their old enemy Benedict, who himself has a vendetta against Bank, the crew is out to pull off a major plan; one that will unfold on the night Bank's newest hot spot opens up. They're not in this for the money, but for the revenge.

Taglines:
What are the odds of getting even? 13 to one.

The fake nose Matt Damon wears is an in-joke reference to
The Brothers Grimm, in which director Terry Gilliam wanted the actor to wear a fake nose but the studio vetoed it.

Continuity:
Whenever the principals are at the airport, Gulfstream-class private jets await them. Gulfstream passenger cabins have distinctive oversize rounded "porthole" windows. Only such planes appear on the tarmac; however when there is a momentary in-flight clip showing the passenger's aerial view of the passing landscape below, the window is a small "sardine can" window of a typical commercial airliner. Clearly this was generic stock footage of "anyplane" flying over "anycity". When the highrollers are later disembarking, the windows become classic Gulfstream portholes again.

A lot going on, but nothing much happening….

Ocean Thirteen's slick credit sequence, highlighting Brad Pitt in all
his movie star glory and letting us all know that Soderbergh and his
camera are up for some glossy fun, gets the heart racing in
anticipation of a slick, sly heist caper on par with #1 and superior to
#2.


But then, as detail upon detail is heaped upon the audience and
increasingly silly machinations are put in place to ensure the
casino-robbery plan works, it all starts to unravel until, burdened by
its own only-in-the-movies logic, the film grinds to a halt just when
it should be at its most exciting.

At the 80 minute mark, the film, in desperate need of a compelling
story to kick-in, is still setting up the details of the heist. No
tension has been created, no forward momentum is in place, no
characters are established sufficiently to root for. Soderbergh is no
doubt hoping the good will audiences have for his characters from the
first film is still in place here (sorely tested in Oceans Twelve). And
despite taking all this time to create a detailed if rather ludicrous
heist plan, it then boils down to relying on coincidence rather than
cunning for it all to work.

Clooney and Pitt still have the charisma and chemistry to make some
moments enjoyable, but there isn't the zing in their banter that was a
highlight of the first film. Other returning cast members – Matt Damon,
Bernie Mac, Elliott Gould, Andy Garcia – are all reduced to plot
devices rather than given any substance (I know this isn't meant to be
a in-depth character piece, but gimme somebody to care about and not
just ogle!). Best moments come from Scott Cann and Casey Affleck; most
embarrassing from Don Cheadle. And though Al Pacino is suitably
villainous as the bad guy, he's also the most interesting and
compelling character in the film, making his ultimate downfall (which,
lets face it, is no spoiler) a little bittersweet (I would've liked to
have seen him slap Danny Ocean up the side of the head, if only to
create a little spark in the film).

What is sorely missing is a strong female character. Julia Roberts
provided it in #1; Julia and Catherine Zeta-Jones were the best things
about #2. In O13, Ellen Barkin is reduced to playing Pacino's 2IC as a
blindly-ambitious slut, and its awful. Other female characters are
either casino-pit screechers or hookers, underlying the boys-own
macho-ness of these films.

It does look great in parts – the set design and CGI work is impeccable
– and Soderbergh, holding his own camera under the name 'Peter
Andrews', shoots his cast and the locales sumptuously in deep, rich
reds and golden tones. But at 122 minutes its a long slog.

With a triumvirate of blah threequels this American summer already
clogging multiplexes, Ocean Thirteens only adds weight to the argument
that if anything interesting or inspired is going to be done with the
characters or plot in a franchise film, its already been done by the
time a #3 is churned out.