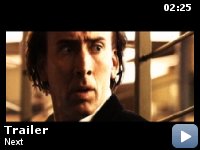 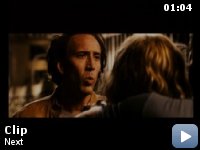 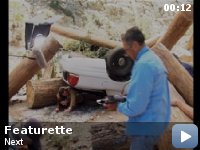 A Las Vegas magician who can see into the future is pursued by FBI agents seeking to use his abilities to prevent a nuclear terrorist attack.

Storyline
Las Vegas showroom magician Cris Johnson has a secret which torments him: he can see a few minutes into the future. Sick of the examinations he underwent as a child and the interest of the government and medical establishment in his power, he lies low under an assumed name in Vegas, performing cheap tricks and living off small-time gambling "winnings." But when a terrorist group threatens to detonate a nuclear device in Los Angeles, government agent Callie Ferris must use all her wiles to capture Cris and convince him to help her stop the cataclysm.

Taglines:
If you can see the future, you can save it.

All three helicopters (2 black, one white) are Eurocopter (nee Aerospatiale) AS-350 Ecureuils (Squirrels). The N-numbers were all sequential as well – N350SC, N351SC, and N352SC.

Continuity:
During the scene when Chris and the agents are walking along the catwalk, just prior to Chris's precognition of getting shot by a sniper from behind them: As Chris and the FBI agents are about to turn 90 degrees left on the catwalk, there is a cylindrical duct of some kind behind them with a white tarp covering the end. As they walk past it, the tarp gets sucked down and pulled out of sight – possibly a film crew action, or just part of what the machinery is being portrayed to do. However, after his precognition of getting shot, the scene rewinds to their approach on the catwalk, but this time, the white tarp at the end of the tubing does not get sucked in, it remains covering the end of the duct.

Emcee:
Ladies and gentlemen, please welcome the man who knows what you're going to do before you do it. The amazing Frank Cadillac!

Far more than I expected


Next is a much better movie than I expected to see, having read some of
the reviews which called it disjointed and silly. Quite to the
contrary, I found it deeply absorbing. I quickly picked up on the
elements which must have caused some reviewers to accuse it of being
disjointed, and began enjoying them. Of course silliness is part of any
sci-fi story, we suspend our critical senses in that regard or we do
not become sci-fi fans.

I single out one performer among a fine cast. Julianne Moore has really
established herself as *the* deadpan action queen. She was a better
Agent Starling than Jody Foster was, and she's a terrific, dominant
presence in this film. Kudos to her for propelling herself to the top
of a tough genre. She makes films more interesting to watch, by dint of
her strong performances.

I read Phillip K. Dick's "The Golden Man" many years ago and still
remember a lot of it. When I first began hearing about this movie I
immediately flashed to it and wondered if this was a movie of that
intriguing story. The answers are "yes" and "no." "The Golden Man" is a
much more ordinary story, but with resounding insights on the
consequences of his existence. And his skin was a compellingly
attractive rich golden hue, which helped make him irresistible to
women. None of that fits this new story, and was properly omitted.

What is translated so well from the written page to the screen is the
government's intense interest in him (although for different reasons),
its efforts to get him under official control, and the exceeding
difficulty of doing so. And of course, the story ends in a wholly
different way than the movie, a very satisfying and inevitable
conclusion that bolsters Mr. Dick's reputation for opening the future
to us.

I just have to add, the flurry of action sequences which come like a
staccato rendition of The Flight Of The Bumblebee during his escape
from custody, is thoroughly delectable and brought more than one
involuntary "Ha!" from the audience I saw it with, including from me.
It's one of the tastiest treats in the film.

And finally, yes, I too wish I knew who the heck these terrorists were
and what the heck they were trying to accomplish with their nefarious
plot. But I guess that's the brave new world we live in. We just don't
get to hear the bad guys' dialogue, their reasons for doing the things
they do. In that way Next is giving us another insight, not dropping us
cold as others have complained. The only legitimate beef I agree with
is the entirely unnecessary and just plain goofy Nicholas Cage business
during the final pursuit. It looks like it must have been an idea of
somebody too high up among the moguls to deny, but it is a definite
distraction causing "Huh? What?" moments when the action is at its most
intense.

All in all, a feather in everybody's cap and a movie I fully recommend
without reservation. Drama, humor, really fine action sequences,
twists, great characters. As baseball great Yogi Berra once said, "
Don't miss it if you can."