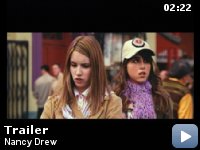 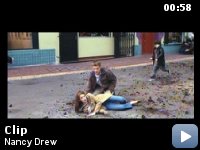 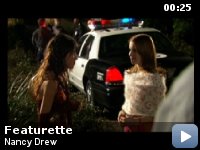 Teen detective Nancy Drew accompanies her father on a business trip to Los Angeles, where she happens upon clues to a murder mystery involving a movie star.

Storyline
Nancy Drew moves to Los Angeles and in typical Drew fashion, immediately stumbles upon a mystery concerning a dead movie star and her inheritance. Nancy soon discovers that the rude needling from her new classmates is the least of her worries as she's almost run over by a car and nearly blown up diffusing a bomb. Nancy's luck runs out when the bad guys get the drop on her and put Chloroform over mouth! Nancy is taken by complete surprise and barely has time to fight before the anesthetic hits her nostrils and turns out her lights! They drug Nancy in broad daylight and make her go nighty night! The attack is so effective, so precise, people walk right past the vehicle with no idea there's a young girl inside, fully anesthetized, chloroformed out of her mind! Nancy has no idea what hit her as her abductors drive her to their hideout. Nancy comes to drugged but quickly escapes her attackers…

Taglines:
Get a Clue.

Emma Roberts worked with an on-set etiquette coach for the role.

Thug:
Who are you?

Nancy Drew:
Hello. I'm Nancy Drew. It's nice to meet you. May I ask who you are?

Good fun, got my daughter wanting read the old series! A win-win!


I disagree with previous comment about this movie. I think it was cute
and fun and it carried a good message for young girls like my daughter.
You don't have to dress like a cheap hooker to be cool. You can be
smart and pretty and classy all at once.


I think the cast was good and the story was fine for the target
audience. All-in-all my wife, daughter (10) and I each thought it was a
good movie. I certainly recommend it. It also has encouraged my
daughter to start reading the original Nancy Drew mysteries which I am
sure she will love much as I loved the Hardy Boys.

It was a struggle to get her to sleep tonight because she wanted to
start reading right away. I can't think of a better outcome for that
movie than rekindling interest in that classic series.