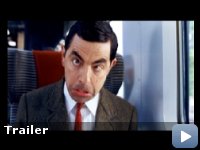 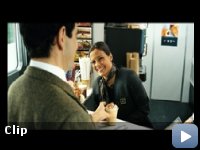 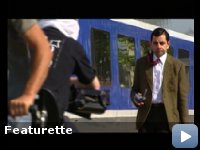 Mr. Bean wins a trip to Cannes where he unwittingly separates a young boy from his father and must help the two come back together. On the way he discovers France, bicycling, and true love, among other things.

Storyline
Mr. Bean enters a church raffle and wins a vacation trip to France as well as a camcorder. After boarding a Eurostar train and arriving in Paris, the French language proves a barrier for Bean, as he struggles to get across the city to catch a train to the south of France from the Gare de Lyon. Taking time to order a meal, he finds the consumption of a seafood platter to be a challenge. Just before catching his train, he asks Emil, a Russian film director on his way to be a judge at the Cannes Film festival to use his camcorder to record his boarding, but accidentally causes Emil being left behind at the station. Bean attempts to cheer up the director's son Stepan as the train continues south but matters are made more hectic by the fact that Emil has reported his son to have been kidnapped and Bean losing his wallet and essential travel documents at a pay phone where he and Stepan attempt to contact Emil…

Lily at the Stereo

The original idea for "Mr. Bean's Holiday" was Mr. Bean going to Australia instead of France.

Continuity:
When Mr. Bean Arrives at Gare Du Nord he leaves the Eurostar that brought him to Paris. When leaving this train we see a red and gray TGV of the "Thalys" class (running from Gare du Nord to Amsterdam or Cologne) opposite Mr. Bean's train. When Mr. Bean walks on the platform and points his video cam to the train windows to make a shot of himself we see a blue and gray TGV (color-scheme "TGV Nord") instead of the red and gray reflecting in the train windows.

Vicar:
Three-one. Thirty-one. And now to the first prize in today's raffle in aid of the "roof appeal." Thank you, Lily. Indeed. The magnificent holiday to the south of France, kindly sponsored by Dalesborough Travel Limited. So, thank you, guys. The winner of this prize will travel by Eurostar train to Paris…

Did we watch the same movie??

Here's the deal: Everyone, and I mean EVERYONE has panned Mr. Bean's
Holiday for being unfunny, a cow milked dry, same old same old, blah
blah blah. Either these people just don't have a sense of humour, if I
may be that harsh, or they didn't even see the flick and just reviewed
it based on the weak trailer and their own false assumptions. I on the
other hand have seen this movie and I can honestly say that it blew me
away. It is not only about ten times better than its weak 1997
predecessor (which the film wisely ignores completely), it is a
genuinely great movie. It's a feel-good movie which actually makes you
feel good (!!) and never turns into awkward sappiness. It is also
absolutely hilarious and, thank god, unlike the original movie this one
doesn't recycle gags from the TV series.


The basic story is that Mr. Bean wins a ticket to Cannes, where he
accidentally separates a young boy from his father. Bean must help the
kid find his father again. The plot is hardly the focus of the film,
though – it's all about Bean and the often awkward, often painful, and
always funny situations he gets himself into.

Rowan Atkinson is at his absolute best and I think it's about time he
gets an Academy Award. No, I'm serious. If you think playing Mr. Bean
is just a matter of goofing around and making stupid noises, I'd like
to see you do it. Atkinson has developed this character to absolute
perfection and is the only one who could possibly play the lovable
idiot. The over-the-top body language, the facial expressions, and the
convincing vibe you get from Bean that, well, the lights are on but
there's nobody home – you can't bring all of this to a character if
you're not a good actor. Rowan Atkinson is a genius and, like most
comedians, he never gets the recognition he deserves.

The supporting cast is good as well, especially Willem Dafoe as an
art-house director with his head so far up his own ass and an ego so
ridiculously huge he makes Roger Ebert look like Adam Sandler. But this
is really Atkinson's show and he carries the entire movie, as expected.
The sight gags and physical humour aren't exactly intellectual, but
they are very funny and fresh most of the time and the comedy is, well,
kind of classy. There's absolutely no toilet/gross-out humour (which I
love, by the way), so it's really a mystery why the stuck-up critics
disliked this as much as they did – assuming they even watched it.
Although the humour is pretty "safe" most of the time, it never stops
being funny and I can safely say that this is a film that the whole
family can enjoy (and trust me, I don't often say that about movies –
"fun for the whole family" usually translates to "fun for the average
two-year old, torture for the rest of humanity" in my mind). It's not
just kiddie stuff and the comedy is universal.

It's a sweet, warm-hearted and very funny movie with a great
soundtrack, good performances, a light plot, and a fantastic ending.
Which leads me to the question: "Did I and the critics watch the same
movie?" Perhaps Willem Dafoe's obnoxiously pretentious character hit
just a little close to home for the snotty critics the film so
obviously spoofed? They can have their "Playback"-type films and gush
praise over them all they want – I'd take this holiday over that any
day.