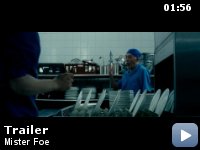 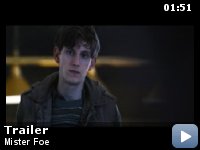 Hallam's talent for spying on people reveals his darkest fears-and his most peculiar desires. Driven to expose the true cause of his mother's death, he instead finds himself searching the rooftops of the city for love.

Storyline
The seventeen year-old Hallam Foe is a weird teenager that misses his mother, who committed suicide, drowning in a lake nearby their house in Edinburgh after an overdose of sleeping pills. Hallam spends his spare time peeping at the locals and blames his stepmother Verity Foe, accusing her of killing his mother. After a discussion with his father Julius Foe, Hallam sneaks out from his house and travels to Edinburgh, where he sees Kate Breck and becomes obsessed with her because of her resemblance to his mother. Kate hires Hallam to work in the kitchen of the hotel where she works and they have a strange romance, while Hallam reaches his maturity the hardest way.

Although much of Hallam Foe is filmed in central Edinburgh, the film avoids showing Edinburgh Castle, which is visible from many of the real life locations.

Errors in geography:
Hallam works in the Balmoral Hotel at the East end of Princes Street, yet all shots of the staff entrance to the hotel are clearly the Caledonian Hotel at the West end of the Street.

Hallam Foe:
Look, you're very attractive but I'm very politically committed to the gay cause.


Years on from his success in Billy Elliott, it's great to see Jamie
Bell being given a vehicle to show that he has the genuine talent to
carry a film. Hallam Foe is a fine British production; quirky,
disturbing, funny, interesting, thought-provoking and consistently
well-shot and soundtracked. At the same time, it's a little gimmicky,
heavily-influenced (Trainspotting, Rear Window et al), and frankly
far-fetched in its depiction of the unlikely love between Hallam and
the object of his affection in Edinburgh (Sophie Myles). But where the
disbelief needs suspending,Jamie Bell's performance saves the day, on
the emotional side through bringing tremendous depth to his character,
and on the physical side by making his rooftop athleticism completely
believable. For all its faults, this is a admirable and brave piece of
work, well worth-watching if you're after something dark and
provocative that will also make you laugh (the badger suit?).