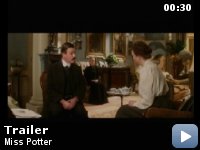 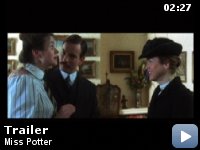 The story of Beatrix Potter, the author of the beloved and best-selling children's book, "The Tale of Peter Rabbit", and her struggle for love, happiness and success.

Storyline
In 1902, in London, the spinster Beatrix Potter lives with her bourgeois parents. Her snobbish mother Helen Potter had introduced several bachelors to Beatriz until she was twenty years old but she turned them all down. Beatrix Potter has been drawing animals and making up stories about them since she was a child but her parents has never recognized her as an artist. One day, Miss Potter offers her stories to a print house and the rookie publisher Norman Warne is delighted with her tales and publishes her first children's book. The successful selling leads Norman to publish two other books and Miss Potter becomes the best friend of his single sister Millie Warne. Sooner they fall in love with each other but Helen does not accept that her daughter marries a "trader". However, Beatrix's father Rupert Potter proposes that his daughter spends the summer with his wife and…

Taglines:
One of the greatest love stories never told

Errors in geography:
The train crosses Arten Gill viaduct in a southerly direction on the Settle Carlisle railway line. She would be going north from London to Penrith (for Keswick), and would cross northwards.

Beatrix Potter:
Stories don't always end where their authors intended. But there is joy in following them, wherever they take us.


I saw this film on December 17th, 2006 in Indianapolis. I am one of the
judges for the Heartland Film Festival's Truly Moving Picture Award. A
Truly Moving Picture "…explores the human journey by artistically
expressing hope and respect for the positive values of life." Heartland
gave that award to this film.


This is the story of Beatrix Potter, the author of many classic
illustrated children's stories such as "Peter Rabbit." She was raised
in the latter part of the 19th Century in an upper middle class, stuffy
family. And worked in the early part of the 20th Century.

It is a story of rebellion, and one woman's liberation from knowing
one's place, settling on an arranged marriage, and quietly raising a
family in the shadow of a man. Beatrix (Renee Zellweger) would have
none of that. She had a dreamy artist's imagination and talent and
temperament from an early age and simply rebelled and lived in her own
created world. When the world recognized her talent, she slowly became
a part of the commercial world via the book publishing industry and a
mentor/love interest (Ewan McGregor) and the mentor's sister (Emily
Watson).

The cast is brilliant. You go back in time with them a 100 years and
live with and understand their stilted social mores. The art direction
and cinematography are stunning and are worthy of Academy Award
nominations.

There is one neat trick of animation that appears throughout this film.
The drawn animal characters occasionally become animated, but only to
Beatrix. It sounds hokey, but it is a clever way to demonstrate how
real these characters were to their author. And, it's why they have
rung true to children and to adults for many generations.

Beatrix is a model for determination and pluck and steadfastness. This
is a beautiful story beautifully told. Undoubtedly, this film will be
compared to "Finding Neverland." "Miss Potter" is of the same high
quality.