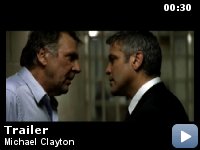 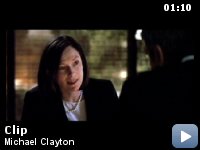 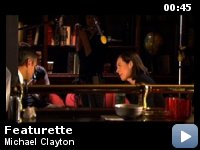 A law firm brings in its "fixer" to remedy the situation after a lawyer has a breakdown while representing a chemical company that he knows is guilty in a multi-billion dollar class action suit.

Storyline
Michael Clayton, a high-priced-law-firm's fixer, leaves a late-night poker game, gets a call to drive to Westchester, and watches his car blow up as he's taking an impromptu dawn walk through a field. Flash back four days. He owes a loan shark to cover his brother's debts (Michael's own gambling habits have left him virtually broke). His law firm is negotiating a high-stakes merger, and his firm's six-year defense of a conglomerate's pesticide use is at risk when one of the firm's top litigators goes off his meds and puts the case in jeopardy. While Michael is trying to fix things, someone decides to kill him. Who? Meanwhile, his son summarizes the plot of a dark fantasy novel.

Taglines:
The truth is what he makes it.

Denzel Washington turned down the title role. George Clooney also originally turned it down, saying he was skeptical on working with a first-time director.

Continuity:
When Michael Clayton spots Arthur Edens in the back alley, we see Arthur carrying a bag of bread. In the beginning of the conversation, one bread in the middle is missing its top, which apparently may have been eaten. In the following shots, we see the same bread full, without the missing top.

Arthur Edens:
Michael. Dear Michael. Of course it's you, who else could they send, who else could be trusted? I… I know it's a long way and you're ready to go to work… all I'm saying is wait, just wait, just-just-just… please hear me out because this is not an episode, relapse, fuck-up, it's… I'm begging you Michael. I'm begging you. Try and make believe this is not just madness because this is not just madness. Two weeks ago I came out of the building, okay, I'm running across Sixth Avenue, there's a car waiting, I got exactly 38 minutes to get to the airport and I'm dictating. There's this, this panicked associate sprinting along beside me, scribbling in a notepad, and suddenly she starts screaming, and I realize we're standing in the middle of the street, the light's changed, there's this wall of traffic, serious traffic speeding towards us, and I… I-I freeze, I can't move, and I'm suddenly consumed with the overwhelming sensation that I'm covered with some sort of film. It's in my hair, my face… it's like a glaze… like a… a coating, and… at first I thought, oh my god, I know what this is, this is some sort of amniotic – embryonic – fluid. I'm drenched in afterbirth, I've-I've breached the chrysalis, I've been reborn. But then the traffic, the stampede, the cars, the trucks, the horns, the screaming and I'm thinking no-no-no-no, reset, this is not rebirth, this is some kind of giddy illusion of renewal that happens in the final moment before death. And then I realize no-no-no, this is completely wrong because I look back at the building and I had the most stunning moment of clarity. I… I… I… I realized Michael, that I had emerged not from the doors of Kenner, Bach, and Ledeen, not through the portals of our vast and powerful law firm, but from the asshole of an organism whose sole function is to excrete the… the-the-the poison, the ammo, the defoliant necessary for other, larger, more powerful organisms to destroy the miracle of humanity. And that I had been coated in this patina of shit for the best part of my life. The stench of it and the stain of it would in all likelihood take the rest of my life to undo. And you know what I did? I took a deep cleansing breath and I set that notion aside. I tabled it. I said to myself as clear as this may be, as potent a feeling as this is, as true a thing as I believe that I have witnessed today, it must wait. It must stand the test of time. And Michael, the time is now.

Good film, but not for everyone


This is a well-made suspense film. It builds slowly, it features the
key characters in sometimes agonising close-up, it weaves an intricate
plot (a bit too intricate, in hindsight — I'm still not sure why some
events were included), and George Clooney is masterful as the morally
conflicted character who does his best to hold his collapsing life
together, while slowly realising that his role in life is not quite
what he thought it was in any case.


There are some things this film is not. It's not an action film … if
you expect that, it will seem very slow. It's not a warm and friendly
film that leaves you feeling good about the world — it was shot in
winter, just to emphasise its coldness. It's not a comedy in any way,
not even through being over-the-top. It's reality rather than escapism.

If you like suspense, unflinching realism, stories of moral conflict,
criticisms of corporate America, or George Clooney — or if you're just
in the mood to see that kind of film — you'll love it. If you're in
the mood for a film to wash away the cares of the day (as I was),
choose something else.