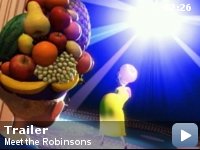 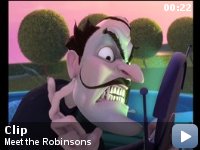 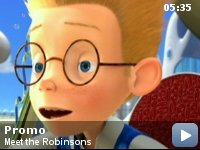 Lewis is a brilliant inventor who meets mysterious stranger named Wilbur Robinson, whisking Lewis away in a time machine and together they team up to track down Bowler Hat Guy in a showdown that ends with an unexpected twist of fate.

Storyline
Lewis an orphan wants to see what his mother looked like. So he invents a machine that looks through your brain so you can see your memories. But this weird kid says he's from the future and warns him about a guy in a bowler hat. The bowler hat guy messes with his invention and it fails. He decides that he's a failure and no one wants him. But the kid that warned him about the guy is here on a mission to find the bowler hat guy that wants to destroy Lewis. To prove he's from the future he takes lewis to the future. But the time machine breaks and he's stuck in the future until he fixes it. In the meantime he spends quality time with the family. But the bowler hat guy is about to alter time and it's up to Lewis to save the future.

Taglines:
Witness the future of hip-hop.

After reading the screenplay, director Stephen J. Anderson actively lobbied to direct this movie. As a child of adoption himself, Anderson personally experienced many of the emotions (questions about belonging, being wanted, etc) that Lewis expresses in the film. [source: director's DVD commentary]

Continuity:
During the memory scanner's wedding scene, Lewis recognizes Grandpa Bud because of the smile on the back of his balding head. In the next few glimpses, Bud has no hair on the back of his head, but when they get in the car together he does.

Michael "Goob" Yagoobian:
Then, um, I didn't choose that one because it was gonna give me pimples so I choosed, um, another scary one cause for, um, all those years that I went for halloween I wasn't scary at all… I love baseball. It's my destiny to play that game. And I don't really care about winning…
[…]

Disney is getting back on the right track


I'm writing reviews for a German movie website and thus got into a
press screening of the new CG animated Disney movie "Meet the
Robinsons" in Munich a little while ago. I'm a big animation fan myself
and love many of the old Disney movies, although lately I've been more
impressed with Pixar's films than anything Disney had to offer in the
last few years. However, the story of this one is actually quite
interesting and not as uninspired and generic as Disney's last
traditionally animated feature Home on the Range or as messy as their
first CG outing Chicken Little. It offers a number of nice surprises
and even a good plot twist or two without causing too much of the old
time-traveling headache. The humor also works quite well, although many
of the jokes seem to be aimed at adults and little kids might not get
all of them. (Didn't bother me, though…) Most importantly, this film
does not contain a single fart joke nor any talking animals or even
animal sidekicks (except for those singing frogs you might have seen in
the trailers, but they're really not the same thing). I don't know how
close this adaptation is to William Joyce's novel "A Day With Wilbur
Robinson", as I've never read anything Joyce has written, but it all
works pretty well and manages to be an exiting and entertaining family
adventure movie.

One aspect of the movie that works particularly well is the design. The
buildings, machines and landscapes of the future really look totally
cool and have a very own look that is inspired by Joyce's illustrations
and various visions of the future from the 50ies and 60ies. They're
beautifully rendered, too. Furthermore, the animation is pretty
awesome. The movements of the quirky characters are very fast but funny
and cleverly stylized. The best example for this is the Bowler Hat Guy
who moves in a unique style that makes him look like a giant Spider.
This really is a welcome change from the hyper-realistic motion
capturing stuff we've been seeing in a lot of movies lately. The
character design isn't so bad either. However, the humans don't look
quite as good as the ones in The Incredibles, the stylization of some
characters makes them look a little too artificial for my taste. The
voice-acting, which relies on solid voice actors and luckily doesn't
involve any fancy stunt casting, leaves nothing to be desired. Danny
Elfman's score is pretty fine, too. I could have done without the
cheesy pop songs that were played at some parts of the film, though.

Altogether, I highly recommend seeing this warmhearted family film to
any animation fan. It might not be as good as my Pixar favorites The
Incredibles and Finding Nemo, but it sure is a lot better than most of
the other studios' wisecracking-and-farting-animal flicks. With Pixar's
John Lasseter pulling the strings at Disney's animation unit now, they
finally seem to be getting back on the right track and I'm looking
forward to their next projects, especially the traditionally animated
The Frog Princess.

One last thing: as some of you might have heard, Disney wants to start
putting original animated shorts in front of their feature films again.
Meet the Robinsons kind of makes a start by showing the old Mickey,
Donald & Goofy short Boat Builders in the beginning. It's a great
experience to see one of those on the big screen again and the kids in
the audience apparently loved it.