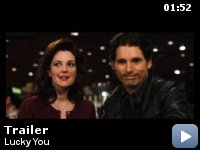 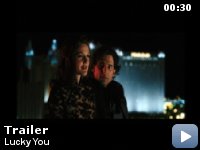 A hotshot poker player tries to win a tournament in Vegas, but is fighting a losing battle with his personal problems.

Storyline
In Las Vegas, Huck Cheever is a poker player, brilliant but also prone to let emotion take over. It's the week of the poker world series, and Huck must come up with the $10,000 entry fee, which he wins, loses, borrows, and loses – and even steals part of from Billie Offer, an earnest young woman who's new in town and who catches Huck's eye. By the time the tournament starts, Huck owes everyone. Complicating things is the arrival of Huck's father, whom Huck detests for having left his mother, a champion player in town to win. Can Huck learn to play poker the way he lives and to live the way he plays poker? Or is his only flush the sound of his life going down the toilet?

Errors in geography:
There is a brief shot of 'Huck Cheever' riding his motorcycle at dawn to Bakersfield to visit 'Billie Offer' just before the big tournament. In this shot he is clearly riding in the wrong direction. The Stratosphere's tower is toward the right of the screen, and the Center Strip casinos south of it are in the middle of the screen. Cheever rides past camera position, heading due east toward Arizona. California and Bakersfield are southwest of Las Vegas. The most direct route to Bakersfield would be I-15 south to I-58 west, both of which are miles away on the other side of the Vegas Strip.

Billie Offer:
Do you mind if I get my fortune cookie first? I like to think about it during the meal.

Poker — I hardly know her!


(I just had to say that before anyone else!)

I don't know anything about poker, but I enjoyed this film all right.

The people in the audience who do understand the game were getting a
lot more out of it than I did. They were oohing and ahhing and tensing
up like they were at a real poker tournament.

I'm surprised Drew Barrymore took a supporting role like this. She's
good and lovely as always (how come she still looks 20?), but doesn't
get enough to do. Robert Downey Jr and Jean Smart are also woefully
underused.

The film really belongs to Eric Bana and Robert Duvall. Eric is
handsome and solid. And it's a real treat to watch an old pro like
Duvall.

It's only a slight tale, but a pretty good one. I could tell from one
of the first scenes how it was going to wind up. Hey, maybe I should
take up poker.