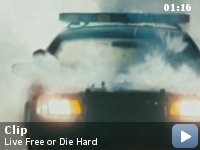 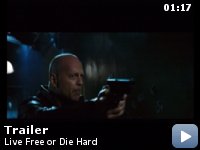 John McClane takes on an Internet-based terrorist organization who is systematically shutting down the United States.

Storyline
When someone hacks into the computers at the FBI's Cyber Crime Division; the Director decides to round up all the hackers who could have done this. When he's told that because it's the 4th of July most of their agents are not around so they might have trouble getting people to get the hackers. So he instructs them to get local PD'S to take care of it. And one of the cops they ask is John McClane who is tasked with bringing a hacker named Farrell to the FBI. But as soon as he gets there someone starts shooting at them. McClane manages to get them out but they're still being pursued. And it's just when McClane arrives in Washington that the whole system breaks down and chaos ensues.

A single frame shot of director Len Wiseman's partner Kate Beckinsale is spliced into the opening credits, when the van is outside the exploding house.

Factual errors:
When the government is hit by the first hacker attack, the monitors and screens go dark, implying full power outage. When power is restored, the monitors all revert straight back to displaying programs, rather than to a boot-up screen.

Clay:
I'm sending you the code.

Mai Lihn:
Yes, I see that. Thank you.


…but literally a quadruple serving of awesome "Die Hard" action.

My girlfriend and I saw "Live Free Or Die Hard" at a premiere screening
last night at Radio City Music Hall. The place holds about 5,000 seats
and it was packed.

Julie and I are not particularly big 'Die Hard' fans. And having to
catch a train home from Grand Central station at a certain time, we
both agreed that if the movie was sub-par, we would split early to get
home earlier.

So finally the lights go down around 9:20 and out comes Bruce Willis.
He respectfully apologized and then started jazzing up the audience for
the film. The excitement was palpable as the crowded theater whooped it
up with Bruce shouting "Are you ready!!!"

Well, Julie and I were, as we got swept up in the excitement and
cheered aloud as if we were at the ball game. Even the couple next to
us, I'd say they were about in their late sixties, dressed very
'proper', were just as energized.

The movie starts and a mere few minutes in, the action explodes. By
twenty minutes into the film, Julie and I were sold. Who cares what
time we're gonna get home!?

I have not had this much fun at the movies since I can't remember when.
I have always loved summer movies, but only the ones that deliver the
goods. The action sequences are top shelf, 21st century movie making
brilliance. These explosive scenes are a seamless composite of
fantastic, real world stunt work, and exceptional CGI. Hands down, they
make the film. And for an action movie with 'die hard' in the title,
I'd say that was the point.

It was awesome watching this film with so many people because it was
like riding a gigantic roller coaster, with everybody having a shared,
hair raising experience. People were cheering like when Luke blew up
the Death Star. The humor throughout was just right. By the end of the
film, our senses were stunned as we dizzily made our way out of the
theater, thoroughly entertained.