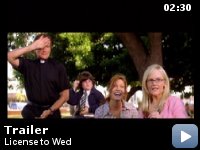 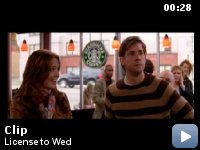 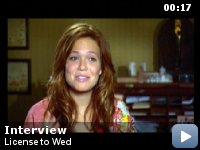 A reverend puts an engaged couple through a grueling marriage preparation course to see if they are meant to be married in his church.

Storyline
Sadie and Ben are in love, and although Ben suggests getting married in the Caribbean, Sadie has her heart set on a wedding at the family church, St. Augustine's. Ben says sure, and they meet with the pastor, Rev. Frank. The only date open for two years is three weeks away, and Frank insists the kids go through his marriage prep course. They're to write their own vows; he also demands chastity, bugs their apartment, initiates arguments, has them care for robot twins, creates friction between Ben and her family, and raises doubts in Sadie. Desperate, Ben looks for dirt on Frank. Can he undermine Frank's authority and keep Sadie's heart?

WILHELM SCREAM: During the marriage road test, an old man on a scooter crashes into a car.

Reverend Frank:
By the power of God and the minister of National Security and Justice of Ocho Rios, Jamaica… I now pronounce you husband and wife.


This movie was a bit of a bore. I walked in rather neutral with my
expectations, and after the first 10 minutes realized that this ball of
cheese was not for me. I sat through it all, for the sake of the
company I was with.

Mandy Moore and John Krasinski are cute, but very flat characters.
There is little or no character development in this film. Robin
Williams as Reverend Frank tries to save the show with his humorous
antics, but was unfortunately cliché in his attempts. The little boy,
Josh Flitter, does an excellent job as the annoyingly forthright
"minister in training", as do the other children playing minor roles,
but the overall attempt was bland.

The movie neither humorously avoids morals, nor does it end with moral
enlightenment. The "lesson" in the end is weak and predictable.

If you're looking for something heartwarming, inspiring, or
thought-provoking, turn elsewhere. If you'd like a few cheap laughs
with a weak storyline, this could be your film.