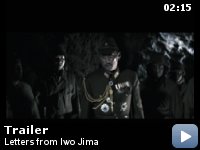 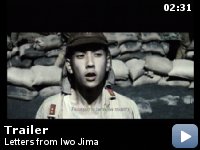 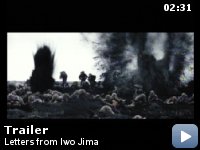 The story of the battle of Iwo Jima between the United States and Imperial Japan during World War II, as told from the perspective of the Japanese who fought it.

Storyline
The island of Iwo Jima stands between the American military force and the home islands of Japan. Therefore the Imperial Japanese Army is desperate to prevent it from falling into American hands and providing a launching point for an invasion of Japan. General Tadamichi Kuribayashi is given command of the forces on the island and sets out to prepare for the imminent attack. General Kuribayashi, however, does not favor the rigid traditional approach recommended by his subordinates, and resentment and resistance fester among his staff. In the lower echelons, a young soldier, Saigo, a poor baker in civilian life, strives with his friends to survive the harsh regime of the Japanese army itself, all the while knowing that a fierce battle looms. When the American invasion begins, both Kuribayashi and Saigo find strength, honor, courage, and horrors beyond imagination.

Taglines:
From Clint Eastwood, director of FLAGS OF OUR FATHERS, the battle of Iwo Jima seen through the eyes of the Japanese soldiers.

Anachronisms:
The Japanese script uses a number of "gairago" (foreign loanwords), which are in current use, but would have been frowned upon by the nationalist government at the time. These include "raifuru" for "rifle" and "jiipu" for "jeep".

Lt. Colonel Oiso:
We will make a run for Motoyama. There is no cover for 2 kilometers, it will be every man for himself. See you on the other side, if not on this earth, then in the next world.


I was very disappointed to learn that this movie was only going to have
a limited showing in the US, only one or two theaters on either coast.
My wife and I both enjoyed "Flags" and were pleased when we learned
that Clint Eastwood made a second movie, this time telling the story
from the Japanese perspective. As luck would have it, we going to Japan
for the holidays so we decided to try and see the movie in Tokyo during
our trip. We went to the Ginza area of Tokyo and, to our surprise, the
movie was completely sold out. We needed to buy tickets at least one
day in advance. Further, we learned that the movie was currently number
1 in Japan. Wow – that's impressive that an American made movie would
become number one in Japan! Way to go, Clint! After a little extra
planning and some adjustments to our schedule, we bought advance
tickets and came back the next day.

We completely loved it. We were moved and stirred with many emotions
including anger, anger over the horrors of war. We actually liked it
better than "Flags of our Fathers". The movie was in Japanese and, as
near as we could tell, Japanese appears to be the native language of
the film. There were brief moments of English, American solders
talking, one flash back scene before the war during a foreign dignitary
dinner, and of course the credits at the end. The movie would have to
be translated and/or sub titled to English in order to have half a
chance in the US. Frankly, I think translation would take away from the
movie's beauty and meaning. I understand a limited amount of Japanese
so I could follow most of the story. The theater was very big and
packed. I was a little uncomfortable at first; I may well have been the
only American in the place. My wife (who is Japanese) and I sat next to
an older couple. At several points during the film, I thought I noticed
the man from the couple crying. When the film ended, my wife talked
with the couple and learned that the old man's father died in Iwo jima.
Later during the trip, speaking with Japanese friends and seeing the
Japanese news, stories of lost loved ones from the war were common and
this movie for the Japanese people has brought many of these memories
out in the open.

To the Japanese, Iwo jima was a part of their homeland where a foreign
invader was going to land and begin its invasion on Japanese soil.
Throughout all of recorded Japanese history, never had a foreign
invader prevailed in war against the Japanese on Japanese land. The
imperial Japanese government of that time used this when they sent
fighters to Iwo jima. These fighters were to ordered to "fight to the
death" defending their country. That to loose and not die fighting
would bring disgrace to self and family. They knew that America was
planning to send an overwhelming force and they knew that they were
being sent to die. For Americans, Iwo jima was just another far away
place and different point in time where American boys were sent and
where, unfortunately, some lives were lost fighting for freedom. My
god, have we become that blasé about the wars our sons and daughters
are being sent to fight in? My wife and I are unique, not typical
American movie goers. I'm American, my wife is Japanese. Together,
we've visited and cried together at the A-bomb Dome in Hiroshima, and
again at the Arizona Memorial in Hawaii. I have relatives who fought in
the Pacific, she also has family who fought in the war and who lived in
Hroshima. I have two sons now serving in the US Marines. Together my
wife and I watched and enjoyed both movies. The movies really didn't
bring anything new, historically, to us about Iwo jima. But, the movies
did do an excellent job reminding us that the ones who pay the price
for war are normal everyday people. People who really don't understand
the reasons or the politics behind why they are being sent to die.
People who live, love, and are loved by family and friends. People with
dreams and ambitions. But, for some reason when called by the leaders
of the time, they go forward, obey orders, and do their duty.
Sometimes, paying the ultimate price.

I've grown up with Clint Eastwood and it has been a wonderful
entertaining journey. These two movies are, in my opinion, his best.
Not because of the action, or the drama, or any of the other things
that Clint Eastwood is known for, but because he's given us two
interlinked stories about the affects of war on the people who are
called to pay the ultimate price – people like you and me. We may be
from different cultures, eat different food, speak different languages,
prey to God differently, but we all have things in common. We all live,
love, want to be loved, and we dream about and long for peace. And,
sometimes we are called to serve and pay for the opportunity. Thank you
Clint.