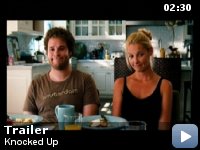 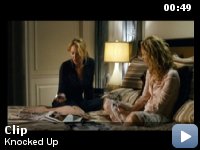 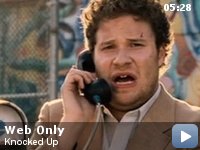 For fun loving party animal Ben Stone, the last thing he ever expected was for his one night stand to show up on his doorstep eight weeks later to tell him she's pregnant.

Storyline
When Alison Scott is promoted in E! Television, she goes to a night-club to celebrate with her older married sister Debbie. Alison meets the pothead reckless Ben Stone and while having a small talk with Ben, Debbie's husband Pete calls her to tell that their daughter has chicken pox. Debbie leaves the place but Allison stays with Ben, drinking and dancing along all night; completely wasted, they end up having a one night stand. Ben does not use condom and eight weeks later, Allison discovers that she is pregnant. She calls Ben and they decide to try to stay together and have the baby. However, Ben needs to grow-up first to raise a family of his own.

Taglines:
Save the due date

Anne Hathaway was originally cast as Alison Scott but left due to 'creative differences'. In an interview, she revealed that she objected to Judd Apatow's plan to use footage of a real birth. Juliette Lewis, Drew Barrymore, Rachael Leigh Cook, Cameron Diaz, Claire Danes, Tiffani Thiessen, Josie Davis, Uma Thurman and Renée Zellweger all dropped out or were booted out. Christina Aguilera turned it down in order to focus on her music career. Brooke Shields, Jennifer Connelly, Michelle Pfeiffer and Sarah Jessica Parker were deemed too old.

Vulgar, Sure, But Certainly Not Stupid.


I've noticed a lot of the negative comments about this title tend to
focus on this movie's vulgar, 'stupid' humor. Now let's get one thing
straight. Knocked Up is vulgar, absolutely it is, but is is not stupid.
Stupid humor is crap like "Mr. Woodcock" and "Good Luck Chuck," movies
with no real craft to any of their jokes.

Knocked Up, on the other hand, is actually pretty clever most of the
time. And even the movie's vulgarity isn't done in an over-the-top,
simply-for-gross-out way (cite the fat bitch from Good Luck Chuck).
It's what I guess you could call 'relevant vulgarity.' Anyway, the
movie is extremely funny. Every joke is naturalistic, but not expected.
The movie's characters are all convincing and multi-dimensional, and
above all likable. Seth Rogan really does make the movie, though. He is
hilarious, but he comes off more like a real nice, frank, down-to-Earth
guy. Just the kind of guy you'd like to sit down and have a beer with.
The kind of guy you'd more than like to get smashed with. The kind of
guy you'd really like to have ill advised unprotected sex with. The
kind of guy you'd love to raise a bastard child with. Needless to say,
he's the reason the movie works.