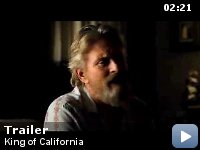 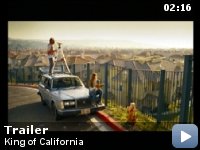 An unstable dad who after getting out of a mental institution tries to convince his daughter that there's Spanish gold buried somewhere under suburbia.

Storyline
A fresh-out-of-the-mental institution father and his emancipated teenage daughter venture together on a quest for an ancient Spanish treasure buried beneath their local Costco in this take on the modern family and the American dream.

Taglines:
We're All Searching for Something …

The screenplay written by Michael Cahill was entered into the 2004 American Zoetrope Screenwriting contest and though didn't win, was a finalist.

Errors made by characters (possibly deliberate errors by the filmmakers):
Young Miranda is left handed while older Miranda is right handed.

Miranda:
Animals were popping up in the most unlikely places. Someone at work said she saw a deer in the cosmetics aisle at Target.


After seeing the trailer for this movie and checking out the cast and
filmmakers I made this a must see at this years Sundance Film Festival.
The combination of Alexander Payne (Sideways,Election,About Schmidt)
producing and Michael Douglas playing wacky gives hope for another
great dramedy along the lines of Little Miss Sunsine and Sideways. King
of California easily meets those hopes and for many it will be much
more enjoyable then those former films. The movie features Douglas as
Charlie a recently released mental patient with a whimsical fascination
for buried Spanish treasure. While Charlie has been away his 16 year
old daughter Miranda played by Evan Racheal Wood has managed to avoid
child services, dropped out of school and support herself and their
home by working full-time at Mcdonalds. Upon Charlies arrival home
Miranda finds that life was much easier without Charlie around, not
only does she have to support their home but now she has to take care
of her unstable father. Persitent with his intent to search for a
mythical buried Spanish treasure Miranda begrudgingly agrees to help
him. The movie finds its humor and warmth in the moments shared between
Charlie and Miranda during their treasure hunting through developed
suburbia that leads them to a unlikely final destination. In the end
the real treasure may not be the gold after all but the love between a
daughter and father.

The ever developing Evan Racheal Wood is solid in the role of Miranda,
the whole movie develops through her narration and her acting is
effortlessly touching. Michael Douglas is outstanding and in true form
here, from start to finish he's a joy to watch, this is easily his best
performance since Wonder Boys. This will definitely be one of the best
movies in 2007, expect praise a plenty for Douglas come awards time.