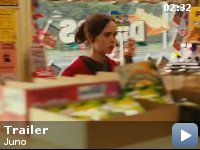 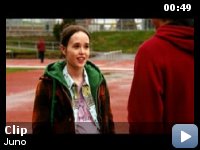 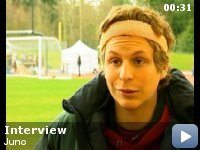 Faced with an unplanned pregnancy, an offbeat young woman makes an unusual decision regarding her unborn child.

Storyline
A tale told over four seasons, starting in autumn when Juno, a 16-year-old high-school junior in Minnesota, discovers she's pregnant after one event in a chair with her best friend, Bleeker. In the waiting room of an abortion clinic, the quirky and whip-sharp Juno decides to give birth and to place the child with an adoptive couple. She finds one in the PennySaver personals, contacts them, tells her dad and step-mother, and carries on with school. The chosen parents, upscale yuppies (one of whom is cool and laid back, the other meticulous and uptight), meet Juno, sign papers, and the year unfolds. Will Juno's plan work, can she improvise, and what about Bleeker?

Taglines:
A comedy about growing up… and the bumps along the way.

J.K. Simmons said that he was so impressed with the script that he would have been happy just to play the teacher who has no spoken dialogue – anything to appear in the film.

Crew or equipment visible:
When Juno is laying on her front windscreen at night, the reflection of the camera is visible in the window as it pans down to her in shot.

Look, I do get it. I fully appreciate that a film about a girl who gets
pregnant, has an early abortion, then manages to move on, would be a
pretty short movie. In fact, so short it wouldn't get made. No one
wants to know about reality. And certainly in 21st century North
America, no one wants to portray abortion as a viable option. Very,
very bad form currently.


But when I see this film reviewed as "blazingly truthful" and the
pregnant 16 year old central character described as being 'in a
pickle', as I did in one review, as if perhaps she'd forgotten a
homework assignment and might get detention, I have to admit that the
cynic who lurks in my soul gets full rein. This is basically a cutesy
film about being pregnant at 16, where despite a few problems, everyone
gets to live pretty much happily ever after. Gosh, girl in a pickle
comes good! Ahhh!! And apparently everyone in the cinema where I saw it
was quite overwhelmed by attacks of the warm fuzzies, except me. Two
seats away, a woman slightly older than me was weeping joyfully by the
end while behind me, young women were giggling happily as sweet Juno's
bump grew. Good grief! Is this really a message we want to give to 16
year olds?

I'm beginning to think I'm something of an oddity. You see, I don't
find it 'blazingly truthful' that a bright, resourceful and articulate
16 year old as Juno is portrayed, would be so dumb as to have
inadequately protected sex then seem surprised to find herself up the
spout. One point of the script is that Juno herself apparently
initiated the sex, thought it through in advance in fact, because she
was bored. I therefore assume the pregnancy was at least to some extent
planned. And if she really had no idea that sex might lead to
pregnancy, her parents (portrayed as bemused but supportive), should be
excoriated for such inadequate parenting. And if I see one more review
which describes Juno as a comedy about growing up 'and the bumps along
the way….' (I'm prepared to bet good money on that having been written
by a middle aged man), I swear I'm going to run amok in the local mall
with a urine dip stick. Being pregnant at 16 isn't a sweet joke,
abortion clinics (whatever you think of their morality – and I'm
neutral on that) are not run by morons, and while Juno has some amusing
one-liners, and a good central performance from Ellen Page, it is
basically a deeply flawed, superficial movie which is trying too hard
to be cute. It's extremely manipulative.

I'm going to be very controversial and suggest that far from being
surprised by an unplanned pregnancy, Juno might actually be a very
willful young woman who wants to add pregnancy/childbirth/adoption to
her 'experiments-in-living' list. At everyone else's expense. It
certainly makes her the center of attention. She wouldn't be the first
girl to get pregnant for that reason.

I found the situation between the adoptive parents more convincing.
Childless Vanessa (Jennifer Garner) is desperate for a baby. Husband
Mark is not so sure, and does at least eventually face up to the truth
of his uncertainty by making a break for it. He may be 40 going on 18,
but he's being honest about it. And for me the most moving scene in the
whole film was when Vanessa held the newborn child in her arms for the
first time, having decided to go it alone as a mother anyway. If there
is a message to be taken from this movie, it's possibly that becoming a
mother when the time is right, is just fine.

A superficial, cutesy, lightweight movie. The fact it was written by a
woman is no excuse. I am gobsmacked that it's been nominated.