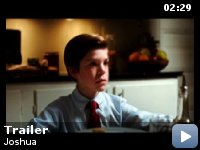 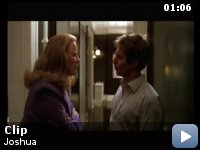 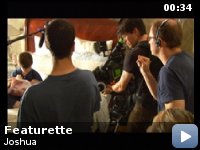 The arrival of a newborn girl causes the gradual disintegration of the Cairn family; particularly for 9-year-old Joshua (Kogan), an eccentric boy whose proper upbringing and refined tastes both take a sinister turn.

Storyline
The Cairn's life seems to be a harmonic family: The father Brad works as a stockbroker, his wife Abby takes care of their common new-born daughter Lily, and the 9-year-old Joshua is high-talented. But the appearances are deceptive. Joshua becomes gradual jealously, that his parents give the baby more attention than him. Therefore he begins to terrorize his family.

Taglines:
The story of a perfect boy who had a perfect plan.

The note that Joshua leaves for his father reads: "Dad,/Eaten lunch already/and gone to/The Brooklyn Museum of Art/having fun with Nunu and Lily." If you arrange the first letter of each line in order, it reveals an acrostic for "Death."

Revealing mistakes:
When Brad tries to seduce Abby in their bedroom, the peak meter of the baby monitor indicates that Lily is still screaming on top of her lungs, when she is actually sleeping peacefully.

Clearly not what the ignorant masses were expecting


I had been waiting quite impatiently for the release of Joshua from the
moment I saw the trailer. Unlike the people who walked out of the
theater, I was not disappointed. But that doesn't mean you won't be.
Joshua is clearly not a movie for the everyman and it never really
tries to be.


It is a story about a boy who longs to be understood by parents who
choose to watch from the sidelines. The previews made the boy seem like
he was just a creepy weirdo, but it becomes obvious quite quickly why
he is the way he is. Joshua tells his father that he does not like
soccer and baseball. In an attempt to seem open-minded and
understanding, his father tells him that it's okay and that he should
just do what he wants (without ever asking exactly what it is that his
son wants). His mother just doesn't care as long as she's not bothered.

Dark, disturbing, creepy, but occasionally sadistically humorous,
events unfold slowly (much to the dismay of people expecting shock
after gratuitous shock) proving Joshua to be a far more calm and
calculating boy than originally perceived. Jacob Kogan's performance is
reminiscent of Haley Joel Osment in A.I. (if that character were a
sadistic schemer). He is the only character who stands out and I
believe this was intentional; the other characters can tell, right
along with the audience, that the boy ain't quite right.

This movie is certainly not for the impatient and/or those who need to
be smacked in the face repeatedly to stay awake during movies. But if
you want a movie that slowly and coolly toys with your mind until the
very end, Joshua will likely deliver what you are looking for.