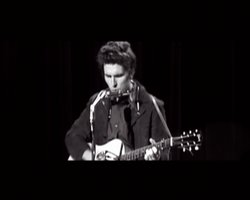 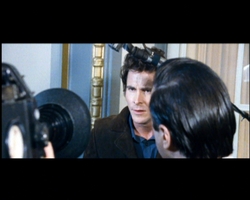 Ruminations on the life of Bob Dylan, where six characters embody a different aspect of the musician's life and work.

Storyline
Six incarnations of Bob Dylan: an actor, a folk singer, an electrified troubadour, Rimbaud, Billy the Kid, and Woody Guthrie. Put Dylan's music behind their adventures, soliloquies, interviews, marriage, and infidelity. Recreate 1960s documentaries in black and white. Put each at a crossroads, the artist becoming someone else. Jack, the son of Ramblin' Jack Elliott, finds Jesus; handsome Robbie falls in love then abandons Claire. Woody, a lad escaped from foster care, hobos the U.S. singing; Billy awakes in a valley threatened by a six-lane highway; Rimbaud talks. Jude, booed at Newport when he goes electric, fences with reporters, pundits, and fans. He won't be classified.

Taglines:
All I Can Do Is Be Me Whoever That Is

Revealing mistakes:
Right after Jude leaves the Beatles and they are chased by fans, you can see the last person in the mob slow down immediately when they're behind the trellis.

Narrator:
There he lies. God rest his soul, and his rudeness. A devouring public can now share the remains of his sickness, and his phone numbers. There he lay: poet, prophet, outlaw, fake, star of electricity. Nailed by a peeping tom, who would soon discover…

Narrator:
– even the ghost was more than one person.

Arthur:
…but a song is something that walks by itself.


Haynes' adventurous biopic of Bob Dylan, which uses six actors of both
sexes and several races ranging in ages from 11 to 50, is both
exhausting and fun to watch. It's also hard to describe. But let's
start with those six and the characters or facets they portray. Arthur
(Ben Whishaw) is the Dylan who incarnated Rimbaud and serves as a kind
of narrator whom we see smoking and giving ironic answers to some kind
of inquisition sporadically throughout the film. Woody (the wonderful
young Marcus Carl Franklin, an amazing a singer and actor) is a
precocious rail-hopper with a guitar (labeled like the real Woody's,
THIS MACHINE KILLS FASCISTS) and tall tales that start with his claim
that he's Woody Guthrie. Woody's scenes show him rescued by a black
family and a white family and performing with country black musicals.
He represents the early shape-shifting Dylan in search of an identity
and telling a lot of lies along the way.

Jack (Christian Bale) is the Dylan who became a hit in Greenwich
Village and went into the South and sang "The Ballad of Hattie Carroll"
and other protest "folk songs,"—the high-profile "political" Dylan who
spearheaded a movement and became famous with his brilliant early LP's.
But Jack doesn't want to be typecast and "betrays" his adoring public
and his lover and folksinging champion Alice (Julianne Moore), a Joan
Baez stand-in seen in later "interviews." Jack disappears and his place
is taken by Robbie (Heath Ledger), a young actor in New York who
becomes famous for starring in a 1965 film depicting the vanished Jack.
Robbie meets Claire (Charlotte Gainsbourg) in a Village coffee shop and
falls in love, and a turbulent ten-year marriage follows, winding up
painfully at the time of the Vietnam War's end.

If Jack represents the cast-off early style and Robbie represents
Dylan's family life, Jude (Cate Blanchett) is Dylan the artist,
quintessentially as seen in the mid-to-late Sixties when he toured
England (an event notably chronicled by two Leacock-Pennebaker
documentaries)—and shocked his audiences, some of whose members felt
betrayed and shouted "Judas!", when he shifted from solo guitar and
harmonica to more personal songs with loud rock accompaniment. Jude's
segments are partly borrowed from Pennebaker, but largely consist of
gorgeous black and white scenes deliberately and "churlishly" (Haynes'
word) imitative of Fellini's 8 ½.

Jude's new style is admired by Allen Ginsberg (David Cross) and
underground groupie Coco Rivington (Michelle Williams) and he becomes
internationally famous. But he continues to be misunderstood by the
protest music old guard and conventional journalists like the British
TV host Mr. Jones (Bruce Greenwood)—who's incorporated into a music
video for Highway 61 Revisited's "Ballad of a Thin Man": ". .
.something is happening here /And you don't know what it is, do you,
Mister Jones." . .

Jude and Arthur articulate the early Dylan's challenging, ironic stance
to the public, but Jude is exhausted on tour and his nihilism leads him
to an existential crisis.

He's reborn symbolically in Pastor John (Christian Bale again), who's
moved to Stockton twenty years later and become a born-again preacher,
singing his own gospel songs. Finally the last version of Dylan appears
in Billy (Richard Gere), in full retreat from the world—till threats to
destroy his town of Riddle cause him to enter public life again. This
sequence evokes a Sixties historical western in which Pat Garrett
(Bruce Greenwood) is a character.

This is only the barest outline of the two-and-a-quarter-hour film, in
which various "Dylan's" are woven in and out. Maybe the reason why I
found Woody's sequences delightful and Billy's colorful but wearying
has to do with the latter's coming two hours later. But Gere and his
sequences evoke Dylan less well and are puzzling to interpret.
Blanchett's in contrast are, of course, the most conventionally
straightforward. She's the only one who successfully mimics the
physical appearance and the speaking voice of the artist (unless
Whishaw does a better job with the voice). But Blanchett's mimicry is
intentionally undercut (and the biopic conventionality of films like
Ray avoided) by having Jude be played by a woman—which was planned by
Haynes in his screenplay before he even chose his actor.

The method Haynes has chosen avoids cliché. This is still a biopic, but
it's a sophisticated one; and the fractured portrait is well justified
by the nature of its subject. Dylan has always been a shape-shifter;
some of his permutations were left out, such as the period of the
orthodox Jew and JDL supporter. But it's intelligent to see Dylan the
man, the husband, the artist, the political being, and the religious
being as completely separate entities because no simple biopic sequence
can really dramatize the complexity of such an artist and such a
protean existence. Haynes' film makes you think about biography itself,
as well as giving imaginative shape to aspects of Bob Dylan no
non-fiction account can really provide.

Maybe it's the daringly experimental methodology that led Dylan
himself, approached through his eldest son Jesse,to grant Haynes both
the musical rights and the biographical rights. Haynes has chosen a
multifaceted and original way of using Dylan's songs. Only Franklin
actually performs them with his own voice. Otherwise the soundtrack
mixes original Dylan recordings with existing covers, new ones by
people as widely various as Ritche Havens, Iggy Pop, John Doe and Sonic
Youth, and other music, including, appropriately for the 8 ½- esquire
sequences, Nino Rota. There is a voice-over narration by Kris
Kristofferson. Haynes worked on the screenplay for years, and then
collaborated with Oren Moverman.

Not for mainstream audiences or be prime Oscar bait, but a challenging,
fun watch.

Shown in the press screenings of the New York Film Festival at Lincoln
Center 2007. Haynes was present fort a Q&A afterward with J. Hoberman
of the Village Voice, which revealed that the director is an
intelligent and articulate man and who knows his Dylan.

TagsCanada
The Death and Life of Bobby Z
Bella