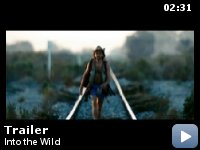 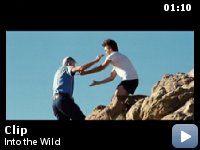 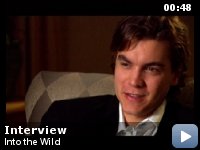 After graduating from Emory University, top student and athlete Christopher McCandless abandons his possessions, gives his entire $24,000 savings account to charity and hitchhikes to Alaska to live in the wilderness. Along the way, Christopher encounters a series of characters that shape his life.

Storyline
Based on a true story. After graduating from Emory University, top student and athlete Christopher McCandless abandoned his possessions, gave his entire $24,000 savings account to charity and hitchhiked to Alaska to live in the wilderness. Along the way, Christopher encounters a series of characters who shape his life.

The watch Emile Hirsch wears in the movie is Christopher Johnson McCandless' real life watch, given to him as a present.


I've never posted a comment regarding a movie but feel compelled to
after attending a screening of Into The Wild at the Toronto Film
Festival last night. I won't speak to story here as it's covered in the
other comments.

This is a movie of real beauty. It made me cry. I felt moved in a way
that happens very rarely. It was an inspiration.

The feelings it evoked were all based on the power of the acting and
the writing. The words were real and human. The relationships seemed
real and human. This may not seem like a great feat – but I consider it
a true rarity. It didn't feel calculated and artificial, like so many
movies (read: Crash – but I'm not here to bash that…). It was very
organic, natural and (I can't say it enough) just beautiful. Cripes,
it's making me sound like a hippie, for heaven's sake. This for me was
Penn's best work since Indian Runner.

What it reminded me of…

… but when I list those it's not because of plot similarities (though
there are some) or style (although I think you can definitely see the
influence of some great films) – it's again because of the heart of it.
I heard a few people at the screening comment that the film was "too
long" but I don't agree. I think exploring a journey of this magnitude
required visiting all of the people he touched and taking the time to
see the land.

Hal Holbrook was just perfect, as was the cast as a whole, and I think
Emile Hirsch is really going places – he was fantastic and he owned the
role. Eddie Vedder's music worked perfectly as well – not distracting
or quirky – just a part of the whole.

The film received a standing ovation and quite a few tears were shed.
Magic.