In the Land of Women 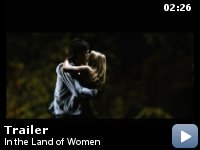 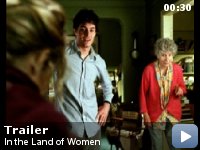 Taglines:
Get ready to fall

Factual errors:
When someone is suffering from acute neutropenia (a common low white blood count following chemotherapy), as is the stated case after Sarah is rushed to the hospital upon collapsing, she would be kept in an isolated environment and her family would not be free to just run into her room off the street and collapse onto her bed, hugging her. At the very least, they'd be gloved, gowned and masked to guard against the spread of infection to the patient.

Carter Webb:
I've been trying to write this letter for a while now, the kind you said you'd never received. The kind I've been working on my whole life. I remember being 13 years old, sitting in my room all night, listening to the same song over and over. I thought that if I could write something beautiful…


This film is getting a 9 based soley on the completely misleading
promotion.

I went into this expecting a love story between Carter Webb (Adam
Brody) and Lucy Hardwicke (Kristen Stewart). I was expecting a dramatic
age-gap romance with an ending about his having to go back to Los
Angeles.

What I got was a totally confusing love hexagon that ended up not being
about love at all.

Carter just got dumped. So he decides to go to Michigan to live with
his grandmother (who is by far the best and most interesting character)
and ends up becoming really close to the women across the street.

While it was moving, touching, and all that good stuff, I left the
theater with one thought in my mind. "What the hell just happened?" It
was fantastic. I would highly recommend it. However, I would not
recommend expecting what I did. Don't go into this hoping that the
trailers and poster (which show a lovely romance between Carter and
Lucy) ring true to the film. That is not at all what the story is
about. It would make a great film, in my opinion, and I still wish it
had taken that direction, but sadly it did not. While still fantastic,
you should expect a film about real people (with many flaws and
weaknesses that humans have, like the inability to to stand up for
themselves) not a movie like "She's All That" where the two young,
good-looking people fall in love with an epic romance.

That is not this film. Go see it. But see it to see a great study on
characters, not story.

TagsUSA
Disturbia
Love and Other Disasters