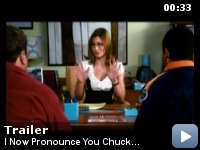 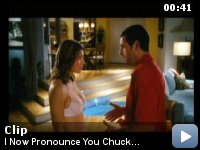 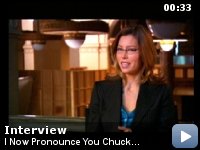 Storyline
Chuck Levine and Larry Valentine are friends and Brooklyn firefighting partners. Widower Larry, who still mourns the death of his wife Paula, is having problems changing the beneficiary on his insurance policy from Paula's name to his children's. He is worried about his children's future if he were to be killed in the line of duty, and is contemplating quitting his job for something less risky, but he also does not want to forfeit his firefighter's pension as he also see it as a safety net for his children. Larry saves Chuck's life on one of their calls. So when Chuck tells Larry that he owes him one, Larry takes him up on his offer. Larry's favor: despite both being heterosexual, that they enter into a domestic partnership, in name and paper only, to provide that much needed protection for Larry's children. Chronic womanizer Chuck reluctantly but eventually agrees…

During the parade when Chuck and Larry are quizzing each other on different aspects of each other's personalities, Adam Sandler and Kevin James each give their real birthdays when asked.

Continuity:
When Chuck and Larry go into Alex's office, her glasses case switches between open and closed between shots.

love…but not in love

Last night I went to a screening of this film and didn't know what to
expect. I have to say this is the best Adam Sandler comedy since Happy
Gilmore. It seems that with this new comedy duo that Sandler got his
magic back. This story is about two firefighters in Brooklyn who have
been best friends for what seems like forever. Larry Valentine (James)
is a single dad trying to raise two kids on his own and Chuck Levine
(Sandler) is a notorious playboy who has a new girl(s) every night.
When Larry tries to change his beneficiary from his late wife to his
children he finds out that the process would take a long time. Because
he's a firefighter, and worries that he could go at anytime, he wants
to make sure his kids will be OK. After a traumatic incident he feels
even more pressure. When he finds a loophole in the system, he asks
Chuck to be his domestic partner. Throughout the movie their
relationship is under fire and it's up to their attorney, Alex (Jessica
Beal), who believes they're gay, to save them from criminal charges.
They try to keep their relationship a secret but it eventually gets out
that they're a couple. Everyone they know starts treating them
differently and they are witness to the discrimination homosexuals face
on a regular basis. Little do they know, when they defend themselves,
they defend gay people in general. Dan Aykroyd plays their Captain at
the fire house and is also their voice of reason. Steve Buscemi plays
an inspector who is sent to their house to catch them at their game.
There are numerous cameos, by some of everyone's favorites, and they
show up at some of the most random times making their appearance in the
movie that much funnier. When I left the theater I felt like a did 100
crunches because I was laughing so hard. It didn't drag, and it didn't
get overly sappy, at any point. Some of the jokes are stereotypical,
but it's the first time most of them have been on the big screen so it
was fresh humor. I sat next to my gay friend through the screening and
I've never seen a man laugh so hard in my entire life. So, for all you
people who think this movie will be a bash at homosexuals, I say watch
the movie and then make your opinions. I enjoyed this movie so much
that, when it comes out in July, I will PAY to go see it with my
friends.