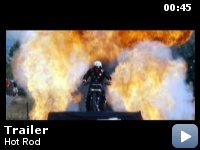 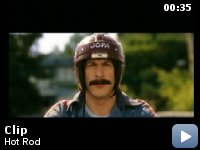 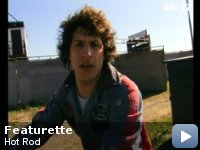 Self-proclaimed stuntman Rod Kimble is preparing for the jump of his life – to clear fifteen buses to raise money for his abusive stepfather Frank's life-saving heart operation.

Storyline
Rod Kimble is a naïf, a slacker living in a small US town with his mom, his younger brother, and his stepfather whose respect he craves. He also misses his dead dad, whom he thinks was Evel Knievel's back-up. Rod, a man-child, believes that he is a stunt man. When his stepfather needs an operation, with help from his brother and his slacker pals, Rod hatches a plan to set a school-bus-jumping record on his moped. First, his crew and he have to raise money to rent the buses and build the ramp. Trouble is, Rod's inept at his chosen career. Looming failure is complicated by the return of Denise, Rod's next-door neighbor and secret heartthrob, who is home from college. Is public humiliation at hand?

Taglines:
Smack destiny in the face

Akiva Schaffer's mother makes a cameo as an extra in two scenes. She's pelted with flyers by Richardson as she walks to her van, and later, she is shown sitting next to him during the screening of Rod's video.

Continuity:
Right before Rod goes down the hill on his wheeled sled, Denise's hands alternate between being in her back pockets and hanging by her sides in different shots.

Dave:
Whatever happened to "Live as a team. Die as a team"?

Rod Kimble:
It's a sham, okay? There's no such thing as a team. You live and die alone.

Rico:
[to Rod]
Do you see what you're doing to him? You're making him upset. How important is this to you, huh? I don't even cry, and look at me. You're about to make tears come out of my face.
[screaming]


My wife and I saw a screening of Hot Rod. From some the comments posted
here I thought we were going to be bored. Nothing could have been
further from the truth. This film was really funny! So funny, that I'm
wondering if the people who say they hated it actually saw the same
film. No, its not fine art, its a summer comedy, and it delivers plenty
of laughs. I am middle-aged guy whose not into early Adam Sandler, or
Napoleon Dynamite type comedies, and this movie had me laughing hard.
Sure, not at every single joke, but at most of them. If you are into
absurdest humor, or enjoyed movies like Hot Fuzz, or Super Troopers,
you'll find plenty to enjoy. P.S. My wife liked it too.