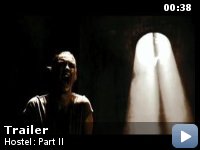 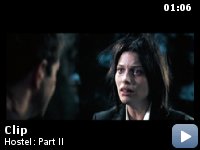 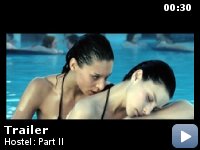 Three American college students studying abroad are lured to a Slovakian hostel, and discover the grim reality behind it.

Storyline
Three female college students take a detour from their partying, enticed by a beautiful European woman who promises seclusion, safety and maybe even romance. What they get is a living hell where they are sold to the highest bidder who's fondest wish is to kill them slowly. Hostel 2 also follows 2 American men who, on the flip side of the coin, are willing to pay to join an exclusive club where a life will end at their hands…any way they like. It's a story of human monsters and the almighty dollar as only Eli Roth could tell it.

Cameo:
[Ruggero Deodato]
the director of the controversial 1980 film
Cannibal Holocaust has a brief cameo as a cannibal in the film.

Factual errors:
After the girls check into the Hostel, the clerk takes their passports, and e-mails the details to various bidders. However, the pictures all show the girls smiling; standard passport rules do not allow smiling or other facial expressions.

Eli Roth has learnt a lot of things from his mate Quentin Tarantino,
but without a shadow of a doubt, how to talk was the one he learnt
best. If you believed everything that came out of the Hostel: Part 2
director's mouth, you'd be under the impression that this was a new
lesson in extreme cinema, pushing the boundaries of what is acceptable
on screen to new and previously unheard of levels. Gore-hounds though
will most likely walk out the multiplexes with the same aftertaste that
the first Hostel left; it's violent sure, but it's not the harshest,
most disturbing film ever made by a long shot. In fact, the only reason
you should approach with kid gloves is because this time, it is girls
that suffer. Young, nice and pretty girls with much to offer the world
and whether or not dismembering them is more shocking than torturing
and killing a horny male jock is a matter for feminist academics to
debate.

The story this time focuses on a trio of art students studying abroad
who decide to do some travelling during their holidays. Convinced by a
local of the attractions to be had in a Slovakian spa (uh-oh!), tough
girl Whitney (Bijou Philips), rich, confident lesbian Beth (Lauren
German) and nerdish, murderer-magnet Lorna (Heather Matarazzo) set off
for a few relaxing days in the former Soviet block, only to find
themselves being splattered all over the walls instead. It's grim and
it's nihilistic, but not without a vein of dark humour running
throughout (the hell-spawn local brats play football with a severed
head), but unlike the first film's bewildered hero Paxton (Jay
Hernandez), it's difficult to cheer the protagonists on. Thankfully,
we're spared the gratuitous, borderline-pornography of the last film,
but the girls are so two-dimensional it's hard to care when their
holiday starts to go wrong, Lorna for instance being so sweet, naive
and childish that she might as well be a parody.

That said though, if you're after more of the same arcing blood sprays
and annihilated bodies, Hostel 2 delivers. However, it neither matches
nor surpasses the original. Claret still flies of course but in a bit
more subdued way and surprisingly, the final act doesn't even come
close to matching the frantic, battle for survival that Paxton went
through two years ago. Much of the violence takes place off camera,
where the audience imagination is set to run wild to the screams of the
mutilated but only one scene towards the end is liable to make you
wince. Considering the shock-value of the original lay in tendon
slicing, fingers being severed, a girl exploding as a train hit her and
the eyeball scene, it seems like a step backwards as far as gore is
concerned. Instead, Roth goes for a dark psychological approach but
woefully mishandles it. The shocking about turns of the plot are more
predictable than the director seems to think and what should have been
a tense, nail-biting conflict of wits misfires, giving us nothing but
loads of shouting and a dramatic, but unbelievable personality shift.
Roth may know how to do gore, but characterisations? Forget about it.

As a result, Hostel Part 2 is evidence of how far you can go if your
self-belief is spectacularly high, but that is all. All talk of this
being a doom-laden, intestine shredding nerve-jangler can do nothing to
disguise the fact that it apes the masters but doesn't outdo them.
Consider how good this would have been if Neil Marshal had directed it
for example? Unfortunately, Roth and Tarantino were presumably too busy
head-banging to men being torn apart by dogs, girls getting buzz-saws
in the face and the gruesome 'Bathory' scene to notice. The Tarantino
connection however is rather apt and had this not been a sequel, it
could just as easily have gone under a different name and been attached
to the Grindhouse project. Don't be surprised if future installments
wind up going straight to DVD.