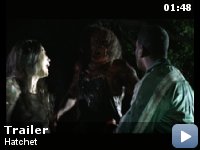 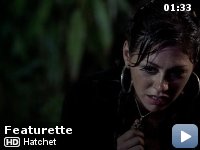 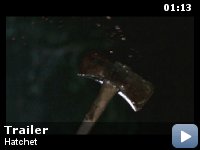 When a group of tourists on a New Orleans haunted swamp tour find themselves stranded in the wilderness, their evening of fun and spooks turns into a horrific nightmare.

Storyline
A motley crew of tourists embark on a boat ride of the haunted Louisiana bayous where they learn the terrifying tale of local legend "Victor Crowley"; a horribly disfigured man who was tragically and accidentally killed with a hatchet by the hands of his own father. But when the boat sinks and the ghost story turns out to be real, the group tries desperately to escape the swamp with their lives…and all of their pieces.

Taglines:
It's not a remake. It's not a sequel. And it's not based on a Japanese one.

The horribly deformed Young Victor Crowley is actually played by a beautiful young actress named Rileah Vanderbilt. When FX artist John Carl Buechler needed a model to test the latex prosthetic on, Rileah was the volunteer. Since the FX had already been molded to her face for the test shots, Rileah played the role in the film.

Continuity:
It's raining in one scene but not in the next, several times throughout the movie (also pointed out by the director in the DVD commentary).

[two men are on a boat in a swamp at night]

Ainsley:
Come on, Pa. We've been out here over three hours. I mean we don't even know where the hell she went.

Sampson:
She's at least… 12-footer if I ever saw one. No, I ain't leavin' here without her.

Sean of the Swamp


Writing a review for Hatchet is almost pointless. Devotees of the
horror genre will see this no matter what is written. In fact, a
certain rhetorically named fan-boy website that prides itself on cool
news has already lauded the movie's villain as the next horror icon.
While I wouldn't be too sure about that, Hatchet does make one thing
clear at least, and that's that writer/director Adam Green has
undeniable talent.


Structured largely as a parody of the Friday the 13th films, Hatchet
casts legendary Jason Voorhees stand-in Kane Hodder as Victor Crowley,
the deformed son of a backwoods Louisiana bayou fisherman (also played
by Hodder), who was presumed killed years earlier in a house fire
started by a bunch of tormenting local kids.

Green follows the stock formula for such movies: take a bunch of folks,
find an excuse to strand them in monster country, and let the audience
revel in watching them get picked off one-by-one.

Where Green excels, however, is in his smartly written, comically-paced
script that is chalk full of genuinely funny inside jokes that are
blatant winks at the audience and along the way establish more of a
bond with Sean of the Dead than Halloween.

In terms of horror movies, there's nothing going on here that is
particularly inventive or even scary, but Green clearly isn't out to
achieve that. Rather, he's paying homage to a genre that he grew up
with, as is clear by the cameos he's given to icons Robert Englund
(Nightmare on Elm Street) and Tony Todd (Candyman and numerous others).

Bolstered by good acting, top notch production values, and
intentionally rubbery costume effects, Hatchet panders to the fan-boy
crowd in glorious revelry. Clearly Green knows his audience likes to
sit back, kick the Fangoria magazines off the couch, and watch somebody
take a belt sander in their kisser.

While I think labeling Victor Crowley as the next horror icon in the
same vein as Jason, Michael Myers, and Freddy is complete
preposterousness, saying Adam Green is someone to keep an eye on is a
more realistic, and complimentary laurel.