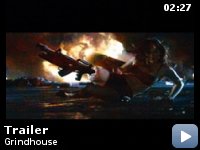 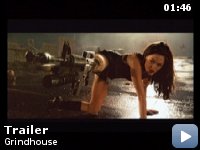 Storyline
A double-bill of thrillers that recall both filmmakers' favorite exploitation films. "Grindhouse" (a downtown movie theater in disrepair since its glory days as a movie palace known for "grinding out" non-stop double-bill programs of B-movies) is presented as one full-length feature comprised of two individual films helmed separately by each director. "Death Proof," is a rip-roaring slasher flick where the killer pursues his victims with a car rather than a knife, while "Planet Terror" shows us a view of the world in the midst of a zombie outbreak. The films are joined together by clever faux trailers that recall the '50s exploitation drive-in classics.

Taglines:
You'll Come Home for the Holidays… In A Body Bag (segment 'Thanksgiving')

Michael Parks, playing Dept. Edgar McGraw in both
Planet Terror and
Death Proof, has also played the exact same character in
Kill Bill: Vol. 1 and
From Dusk Till Dawn.

Errors made by characters (possibly deliberate errors by the filmmakers):
Deliberate mistake, perhaps, that when Jungle Julie mentions, several times, the group Dave Dee, Dozy, Beaky, Mick and Titch, she says Mitch instead of Mick each time.

Stuntman Mike:
Well, because there was a fifty-fifty shot on whether you'd be going left. You see, we're both going left. You could have just as easily been going left too and if that was the case, it would have been awhile before you started getting scared. But since you're going the other way, I'm afraid you're gonna have to start getting scared… immediately!


I went into this film with expectations for an extreme amount of campy
senseless gore and violence – and it was delivered as promised! A
WARNING: Know what to expect when you go see this movie, or you might
be surprised/disappointed. There is no moral, no good sense or life
lesson to be taken from the story lines or characters. Sometimes things
don't make sense and this is all done on purpose in homage to original
exploitation films Warnings aside, Grindhouse is a lot of fun, there
were as many "ooh" and "ahh" moments as there were "oh my god why did
they show that?" moments. All of the actors' performances were right on
and the action directing was excellent. My only negative comment is
that Tarintino's film dragged a bit in the middle, but he more than
made up for it. I couldn't help but raise my fist in the air and shout
out "yeah!" at the end of his flick.


You will be surprise, you will be disgusted and you'll enjoy the hell
out of it.