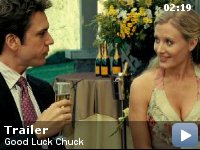 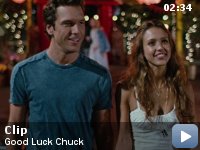 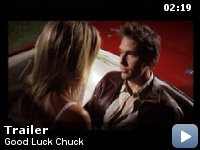 In order to keep the woman of his dreams from falling for another guy, Charlie Logan has to break the curse that has made him wildly popular with single women: Sleep with Charlie once, and the next man you meet will be your true love.

Storyline
Early thirty-something dentist Dr. Charlie Logan has never experienced true love, despite having had a number of girlfriends over the years. After an announcement by one of his ex-girlfriends as such at her wedding, Charlie gets a reputation as being a good luck charm. Every woman he has slept with has met and married her dream man immediately following. He is encouraged to exploit this reputation by his long time best friend, Dr. Stu Klaminsky, a sex obsessed, sex starved schlub who became a plastic surgeon just so that he could masturbate over the sight of women's breasts. Charlie doesn't want to be solely a stepping stone for women, which is how they end up treating him once he gains this reputation as a lucky charm, but rather one's true love. He believes the woman of his dreams is accident-prone Cam Wexler, who works as the penguin caretaker at the aquarium. Cam initially doesn't want to date Charlie because of his reputation as a one-night stand type of guy…

Originally, New Line Cinema was set to distribute, but they gave the film to Lionsgate shortly before production. A similar situation occurred when the studio gave distribution rights for
Alpha Dog to Universal Pictures, but that case was related to controversy over real-life events.

Revealing mistakes:
After Cam walks into the metal post and falls down, rolling to her left, her right hand sweeps her skirt down to cover her exposed panties.

Charlie:
[about having meaningless sex with many women]
It's not that satisfying.

Stu:
I'll tell you not satisfying. Last night I masturbated into a grapefruit. I put it into a microwave and heated it up a little bit, which helped, but… still.


A very uneven comedy. If 3 out of every 10 jokes working is enough for
you, then go ahead.

If you're hoping to see Dane Cook (nearly) undressed, you won't be
disappointed. He strips more in this movie than Demi Moore in
"Striptease".

If you're hoping to see Jessica Alba undressed — too bad! Scanty
attire is the best you'll get.

If you're hoping to see Dane be as funny as he is in his stand-up —
you'll be disappointed.

If you're hoping to see Jessica be funny — what are you, nuts? She's
got no comedy chops! And that old tired "pretty girl falls down a lot"
shtick wasn't funny when it became a movie cliché about 5 years ago.

The only funny moments seem to be when Dane is improvising. When he's
doing the written parts of the script, it clunks hard. (Him dressed in
a penguin costume? Yikes.) The two leads try SO hard to show us they
have chemistry (a lot of shoulder wiggling and cutesy facial
expressions mostly) that it backfires.

There were a lot of gross-out moments that just weren't funny — the
fat sidekick scrubbing his backflap with a scrub-brush for sexual
pleasure, a penguin eating his crap, two seduction scenes with obese
women (straight out of "Norbit" — also unfunny).

The sidekick is so foul and obnoxious he throws the movie completely
off-balance. You feel like the movie needs a sorbet after one of his
scenes to get the bad taste out of your mouth.

The only likable person was the guy playing Jessica's brother (Lonny
Ross of "30 Rock"). I actually think he might have made a better
romantic lead, than Dane — who was somehow off-putting.

Maybe Dane will have more input into his next comedy movie. Maybe that
will help.