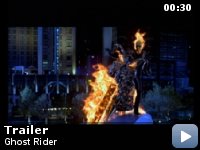 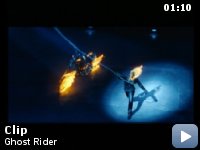 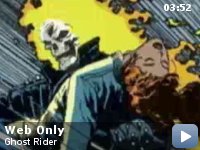 Stunt motorcyclist Johnny Blaze gives up his soul to become a hellblazing vigilante, to fight against power hungry Blackheart, the son of the devil himself.

Storyline
When the motorcyclist Johnny Blaze finds that his father Barton Blaze has a terminal cancer, he accepts a pact with the Mephistopheles, giving his soul for the health of his beloved father. But the devil deceives him, and Barton dies in a motorcycle accident during an exhibition. Johnny leaves the carnival, his town, his friends and his girlfriend Roxanne. Years later Johnny Blaze becomes a famous motorcyclist, who risks his life in his shows, and he meets Roxanne again, now a TV reporter. However, Mephistopheles proposes Johnny to release his contract if he become the "Ghost Rider" and defeat his evil son Blackheart, who wants to possess one thousand evil souls and transform hell on earth.

Taglines:
He's the only one that can walk on both worlds.

The Johnny Blaze video game in the movie is actually a game called "Crusty Demons" (2006) developed by UK games company Climax Studios. The plot is somewhat similar to the plot of Ghost Rider. A group of hard-riding extreme bikers are killed while performing an insane stunt. Satan offers to resurrect them and make them immortal if they use their motorcycle skills to do Satan's work. Climax Studios also developed
Ghost Rider.

Plot holes:
When Ghost Rider takes Blackheart's souls, images of the previous kills he made are seen in the fire. However these kills would be credited to Blackheart's own soul, which is in hell (revealed the first time Ghost Rider tries to punish Blackheart earlier in the film). The souls Ghost Rider is taking are those of the villagers, and so the images that Blackheart would see in Ghost Rider's eyes would be their kills, not his.

Caretaker:
[voiceover]
It's said that the West was built on legends. Tall tales that help us make sense of things too great or too terrifying to believe. This is the legend of the Ghost Rider.

Hell of a Ride


If you go into this movie hoping to see Academy Award caliber acting or
a dramatic plot that's going to move you emotionally, then you're going
to the wrong movie. However, if you're looking for a movie that's a lot
of fun and is going to keep you entertained, then this is exactly what
you're looking for.


The visual effects in this movie are, simply put, amazing. Ghost Rider
is just one of those movies that's cool to look at. As I said before,
the acting sometimes falls a bit flat, but Nicolas Cage does exactly
what's expected of him for the role. It's a bit cliché and humorous at
times, but this is a movie based on a comic book, so you have to expect
that sort of thing.

Sam Elliot and Peter Fonda provide the best acting in the movie, while
Wes Bentley does a solid job as Blackheart and Eva Mendez is just a
very beautiful actress who fits in well as Roxanne.

There are a lot of little gripes about this movie if you look too hard
and overthink it, but as a die-hard Ghost Rider fan, I didn't mind
these things so much. It stayed relatively true to the original series,
while borrowing elements from the 90's series to help make the movie
more visually impressive, which I felt worked really well.

I've been waiting for this movie since they started trying to make it
over eight years ago and overall, I'd have to say I really enjoyed
seeing my favorite comic book character finally make it onto the big
screen.

If you want to go see a movie where you can just sit back, relax, and
enjoy the ride; then go see Ghost Rider without any worry of
disappointment.