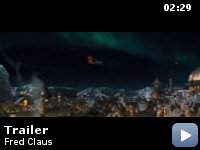 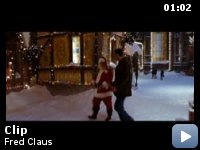 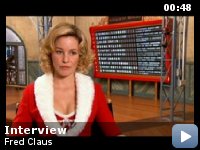 Storyline
During childhood, Fred Claus suffered his younger brother Nick's saintliness. Jump ahead: Fred is a fast-talking, genial but self-centered guy in Chicago looking for $50,000 to open an off-track-betting shop. When one scam goes awry, he calls Nick at the North Pole for a loan: Nick will give him the money only if Fred comes up to help a few days with the Christmas rush. After his girlfriend dumps him, Fred heads north. Santa's facing an audit from an efficiency expert, and it's not pleasant. Fred's job is to review charts and determine who's naughty and who's nice. Is there any fraternal feeling left, can either learn from the other, and what about Santa getting fired?

Taglines:
Christmas comes every year, but this holiday season Santa's brother is coming along for the ride.

Three famous brothers cameo as themselves at 'Siblings Anonymous'. The first is Frank Stallone, who speaks about
Rocky and 'Rambo', two major blockbuster film series that star his brother Sylvester Stallone. The second is Roger Clinton, half-brother of the former US President Bill Clinton. The third is Stephen Baldwin, the youngest Baldwin Brother (specifically he has issues with the eldest and arguably most famous, Alec Baldwin.)

Revealing mistakes:
In one shot during the fight on the snowmobile, the background is painted and clearly fake.

DJ Donnie:
I'm from the south side of the north pole man.

What were you expecting?


I gave this movie 10 stars to counter some of the 1-star reviews, but I
think it garners a solid 7 nonetheless. I don't know what those who
rated it so poorly were expecting, but for me, it was just what I
expected – enough chuckles to be entertaining, pretty Christmas
scenery, and a touching story. My 17 and 12-year-old sons liked it as
well. I thought Vince Vaughn played his typical character, which is
always good for a laugh or two, though rarely one you would choke
yourself on. I don't think the movie would necessarily go over with the
pre-school crowd because it's not "The Santa Claus," but children who
are old enough to understand the emotions being portrayed should enjoy
it. There are a couple of sexual innuendos that may offend the more
conservative viewers, but they likely go over the heads of the
youngsters. I'm always amazed at the range of reviews movies get here
at IMDb, and they truly show why we'll never all get along. I found
this particular film both entertaining and moving, which is all I
usually ask, particularly of a Holiday film. While "Fred Claus" doesn't
go beyond the call of duty so to speak, it certainly lived up to my
expectations.