Fantastic 4: Rise of the Silver Surfer 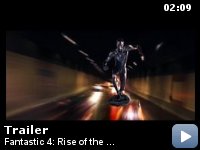 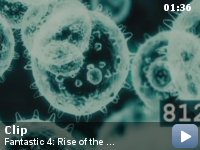 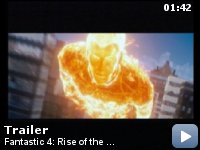 The Fantastic Four learn that they aren't the only super-powered beings in the universe when they square off against the powerful Silver Surfer and the planet-eating Galactus.

Storyline
With Von Doom back in his homeland of Latveria the fantastic four have new troubles when Galactus has decided that Earth is his next target. When his henchman, The Silver Surfer, is sent to Earth he discovers that he's getting more than he bargained for when he encounters the Fantastic Four. But that's not all when Dr. Doom decides that after two years in the homeland he is ready to return.

Taglines:
Discover the secret of the Surfer

The blades of the helicopter that nearly destroys Sue and Reed's wedding were created with CGI.

Errors made by characters (possibly deliberate errors by the filmmakers):
While Johnny's being examined after interchanging powers with Susan, we can see two incorrectly positioned radiographs on the wall: a posteroanterior chest view that's flipped horizontally, and a simple abdominal one that's flipped vertically.

Anchorwoman:
Last night the F.A.A. was forced to ground all aircraft, leaving thousands stranded, when electronic failures and mysterious power outages crippled the western United States. But the big story today, the much anticipated wedding of fantastic couple Reed Richards and Susan Storm will take place this Saturday.


In all its silliness and tongue-in-cheek disposition, the first
"Fantastic Four" movie wasn't really a landmark as far as comic book
films go. But it wasn't so bad either; it's just that after Marvel
Comics' recent domination of the film genre, it's natural for one to
expect that each of its characters having a shot at the big screen
would present something legitimately entertaining to the audience.
Something the first installment failed and the second struggled to
achieve.

In "Fantastic Four: Rise of the Silver Surfer," the four superheroes
are back once again to help everyone solve their gamut of problems.
Reed Richards aka Mr. Fantastic (Ioan Gruffudd) is about to wed Susan
Storm aka Invisible Woman (Jessica Alba). However, an unknown cosmic
entity is causing a screw-up in earth's natural phenomena, prompting
the couple to postpone the wedding, and work with Johnny Storm aka
Human Torch (Chris Evans) and Ben Grimm aka The thing (Michael Chiklis)
to find out the cause of the mysterious occurrence. They soon come face
to face with the Silver Surfer (Doug Jones, voiced by Laurence
Fishburne) and realize that the world's survival is hanging on the
balance. In addition to this, Victor Von Doom aka Dr. Doom (Julian
McMahon) returns and is intent on destroying the Fantastic Four.

Granted, "Rise of the Silver Surfer" has a greater scale than its
predecessor. But for all this, it's still very… middling. The title
and the trailers suggest something of a grand battle between the
eponymous characters but aside from the chase sequence involving the
Human Torch and the Silver Surfer (which, by the way, has been shown
numerous times in the teaser trailer), nothing much exciting still
happens. Not even the team's rescue attempt in London. The quality of
the special effects are inconsistent and all the visual polish
expectedly goes to the Silver Surfer. (And while I personally don't
think it's an issue, I imagine how some fans of the comic book might
sneer at how the characters of Silver Surfer and Galactus were
handled.) Instead, director Tim Story and screenwriters Don Payne and
Mark Frost opt to flesh out the characters more but the end result
feels less natural and more repetitive. Gruffudd does an okay job with
Mr. Fantastic but there's really no feeling of chemistry between him
and Alba, who manages to adequately portray a tough yet vulnerable
character. In contrast, Evans and Chiklis continue to generate an easy
rapport between them and the two get majority of the film's most
amusing moments.

"Rise of the Silver Surfer" barely does what it sets out to do. It
fares a little better than its predecessor with a more serviceable
story and a little more enjoyable action sequences. But taken on its
own terms, the film doesn't present anything to its characters that has
been done much better with other characters of their ilk. The movie is
entertaining to some extent but in the end, it doesn't really rise to
something special.