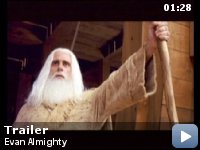 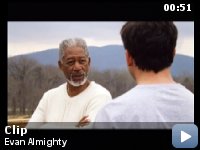 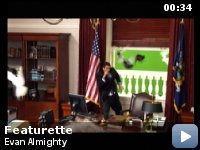 God contacts Congressman Evan Baxter and tells him to build an ark in preparation for a great flood.

Storyline
Buffalo newsman Evan Baxter is elected to Congress with the slogan, "Change the world." He lucks into a huge house in a new Virginia suburb. His Capitol office is also fantastic, but there's a catch: he's tapped by the powerful Congressman Long to co-sponsor a bill to allow development in national parks. In steps God, who appears to a disbelieving Evan and gently commands him to build an ark. Tools and wood arrive in Evan's yard, animal pairs follow, his beard and hair grow wildly, nomad's clothes and a staff appear. Long grows impatient, Evan starts building, his family leaves him, reporters gather, and drought grips D.C. Still, Evan believes. But will he change the world?

Evan Baxter's kids (Dylan, Jordan and Ryan) are named after Michael Bostick's own kids. They are also relatively the same age.

Factual errors:
The area code for the phone number on Eve Adams's real estate signs is 804, which is the area code for Richmond, some two hours away from Washington, D.C. Northern Virginia's area code is actually 703.

Rita:
[looking up at the Ark which is almost finished]
Why couldn't the man just buy a Corvette?


Steve Carell reprises his role as Evan Baxter in this sequel to Bruce
Almighty.

Evan Almighty jumps right into the mix of things with little build up.
Right off the bat we find out that news anchor Evan Baxter has segued
his career into one of political aspirations. Soon after being elected
to the United States Congress under a slogan painting him as a
politician out to change the world, God (Morgan Freeman) commissions
Baxter to build an ark in the midst of one of the worst droughts in the
history of the area.

In a predictable move the area townspeople antagonize Baxter as he
begins the construction of the ark. Baxter's reputation is further
soiled by the fact that his political career is being looked as a joke
when he starts wearing sack cloth on a regular basis, and animals of
all kinds are following him around in pairs. Baxter's boss Congressman
Long, who once supported him quickly, becomes the antagonist as the
people begin to turn against Baxter.

Evan Almighty is predictable on every turn, and has enough humor to
satisfy. The animals do their part to provide a fair share of fecal
humor. Morgan Freeman offers up plenty of wisdom in the role of God.
Steve Carell does an exceptionally adequate job of delivering very
humorous dialogue, which in his style is sure to be adlibbed in great
part. The sheer amounts of animals in this film are overwhelming and a
treat to behold. Overall the storyline and humor feel very cliché. Evan
Almighty was a mild success, but just does not offer anything special
apart from a few good laughs. Parents with children will get their
money's worth out of this, but for everyone else it is a worthwhile
rental.