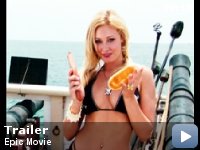 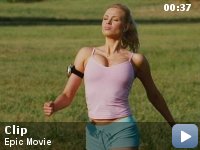 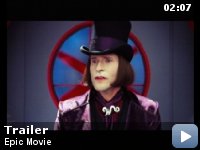 A comedic satire of films that are large in scope, reputation and popularity

Storyline
Four troubled orphans from four separate movie scenario's who are bound together in a wacky chocolate factory after receiving golden tickets to go on an 'epic adventure.' After they escape from the clutches of a very scary Willy Wonka they discover the magical world of 'Gnarnia' through an enchanted wardrobe. There they must seek the help of a randy lion, a hoard of mutants from the x academy, students of witchcraft and wizardry, funky swash-buckling pirates and a mischievous beaver to defeat the evil white bitch!

Taglines:
The mother of all spoofs

Crispin Glover plays Willy, a spoof of Johnny Depp's portrayal of Willy Wonka in
Charlie and the Chocolate Factory. Glover and Depp previously worked together in
What's Eating Gilbert Grape and
Dead Man and later in
Alice in Wonderland.

Revealing mistakes:
When Silas attacks Lucy in the Louvre, his robe reveals his right leg, and it is dark instead of white (Silas' whole body is supposed to be albino).

Narrator:
This is the story of four orphans brought together by fate. They didn't know it yet, but there was something more greater in store for them, something epic.

This thing won't let me vote below a 1….

This movie entered with the tag line of being "written by two of the
six writers of 'Scary Movie'!" What they forgot to mention is that the
two who wrote it were only responsible for writing the credits and all
the jokes deleted for the sake of not causing mass suicide. Put more
delicately, this movie almost makes Pootie Tang look Oscar worthy,
which ironically enough was made fun of in the last Scary Movie for
being horrid. Coincidence? Yeah, not even some sort of Karma dealing
fiend would wish this movie upon the world.

"So," you ask, "What makes it so bad?" I bet your thinking that all of
the funny stuff was in the previews, right? No, actually there was no
funny content in the previews at all, it just seemed that way when
taken out of the context of the movie. Much the same way "Hogan's
Heroes" was funny to people who weren't in Auschwitz during the
Holocaust, the previews are funny to those who haven't seen the movie.
When you actually see the movie, you start to ask, "Why was that funny
in the preview?" The answer: You can see pretty flowers if you ignore
the fact that they are growing from the corpse of a man who died during
a freak green house accident.

Do yourself a favor, rent a History channel documentary on the history
of documentaries and hit yourself in the head with a hammer. It'll be
twice as funny, make three times more sense, and be only a fifth as
painful.