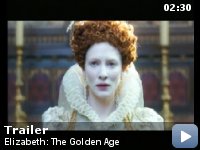 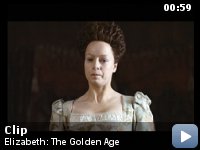 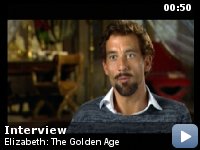 A mature Queen Elizabeth endures multiple crises late in her reign including court intrigues, an assassination plot, the Spanish Armada, and romantic disappointments.

Storyline
Two faiths, two empires, two rulers – colliding in 1588. Papist Spain wants to bring down the heretic Elizabeth. Philip is building an armada but needs a rationale to attack. With covert intrigue, Spain sets a trap for the Queen and her principal secretary, Walsingham, using as a pawn Elizabeth's cousin Mary Stuart, who's under house arrest in the North. The trap springs, and the armada sets sail, to rendezvous with French ground forces and to attack. During these months, the Virgin Queen falls in love with Walter Raleigh, keeping him close to court and away from the sea and America. Is treachery or heroism at his heart? Does loneliness await her passionate majesty?

Taglines:
Blacnhett returns in the role for which she received an OSCAR nomination

El Escorial (the King of Spain's palace) is really London's Westminster Cathedral. Since it's a functioning church, the production team had to wait until the last evening confession was done, strip the interior of everything recognizably modern, shoot every scene during the night, then put everything back in place by morning mass.

Factual errors:
English Admiral Lord Howard said he was losing ships, and was out gunned by the Spanish. However, it was the English ships who out gunned the Spanish, and no ships were lost to either side.

Queen Elizabeth I:
Are you here to tell me I must murder a Queen?

Sir Walter Raleigh:
I would never presume to tell my Queen what to do. Only you know where your duty lies.

Queen Elizabeth I:
Was it my father's duty to murder my mother? She was a Queen, for a time. Oh, I would be loath to die such so bloody a death.

Sir Walter Raleigh:
Since when were you so afraid?

Sir Walter Raleigh:
Kill a Queen and all Queens are mortal. We mortals have many weaknesses: we feel too much, hurt too much, all too soon we die, but we do have the chance of love.

Queen Elizabeth I:
Do we? I have given England my life. Must she also have my soul?

Elizabeth: Die Hard With a Vengeance


This rates as high as it does for me because of the cinematography. It
is dazzling and Blanchett can't be denied, but "Elizabeth: The Golden
Age" is like a chick-flick with explosions plus costumes, super hair,
and loud, intrusive music. The result is faux epic.

My wife summed it up well as we left the theater: "I feel like I've
just flipped through a coffee table picture book for two hours and
somebody turned up the stereo." History wrote this plot but Nicholson
and Hirst thought they could do better. They couldn't, or certainly
didn't. Freshmen composition classes come up with better stuff. Trite,
forced, predictable. Did they even run this by an expert in English
history? You gotta wonder. The script is oozing with 21st century mores
and clichés. It made me think (during the movie, mind you) of the way
Dutch painters depicted Homer and Aristotle in the garb of 17th century
Holland. Are we that dumb? Sir Walter Raleigh is a caricature and Sir
Francis Drake, never properly introduced, was a throwaway. Geoffrey
Rush is wasted as Walsingham. Come to think of it, nearly everybody is
wasted. Every single character is underdeveloped, with the possible
exception of the title character—possible exception.

"Golden Age" set the target high and then turned and fired in the
opposite direction. Realizing the script had missed, Director tried to
make up for it with window dressing. Substance would have served this
queen better. With the colon in the title, I almost expected to see
Bruce Willis saving the day.

You can see why "Golden Age" came out in October because it's not going
to compete for Oscars in categories that anybody cares about. With all
the budget they had for this movie, you'd Universal could have found
better writers.