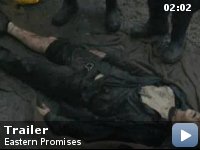 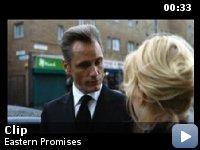 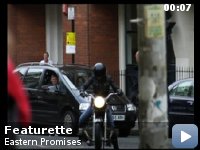 A Russian teenager living in London who dies during childbirth leaves clues to a midwife in her journal that could tie her child to a rape involving a violent Russian mob family.

Storyline
In London, the Russian pregnant teenager Tatiana arrives bleeding in a hospital, and the doctors save her baby only. The Russian descendant midwife Anna Khitrova finds Tatiana's diary written in Russian language in her belongings and decided to find her family to deliver the baby, she brings the diary home and ask her uncle Stepan to translate the document. Stepan refuses, but Anna finds a card of a restaurant owned by the Russian Semyon inside the diary and she visits the old man trying to find a lead to contact Tatiana's family. When she mentions the existence of the diary, Semyon immediately offers to translate the document. However, Stepan translates part of the diary and Anna discovers that Semyon and his sick son Kirill had raped Tatiana when she was fourteen years old and forced her to work as prostitute in a brothel of their own. Further, Semyon is the dangerous boss of the Russian mafia "Vory v Zakone"…

Taglines:
Every sin leaves a mark.

One day after shooting, Viggo Mortensen went to a pub without washing off his tattoos or even changing out of his costume. He claims that some of the patrons became very frightened of him, assuming he was a real member of Vory v Zakone.

Errors in geography:
The scenes involving the football crowds make no logical sense for a real match at Stamford Bridge. In the first shot, the crowd is exiting the ground via the Britannia Gate on Fulham Road after a game. In the second shot, the crowd is moving from Fulham Broadway along Fulham Road towards the Britannia Gate (as it would before a game); in the third shot, a crowd of people is crossing Lillee Road and entering Brompton Cemetary via the north gate (as it would before a game) but in the next shot (in the cemetery itself), the crowd is moving in the opposite direction, towards the north gate and away from the ground as it would after a game.

Azim:
"Should we go shopping?"
[English]


First of all it is amazing the amount of research that went into this
movie. When Mortissen's characters says that his father worked for the
government, in Russian he actually says: "Hunched his back for the
uncle"! Even the poster with little and index finger straighter then
the rest, it all breathers authenticity.


I didn't go in expecting non-Russian actors to suddenly have no accent,
but I did have hesitations about the pronunciation, that usually tends
to be horrible. Not so here, despite the accent (that was slight), the
intonation, the way the characters cary themselves especially
Mortinssen's are very Russian. (Even his less then perfect English
sounds Russia when he misses articles: "Not good place for girl to grow
up.") Overall the director shows a bit of what a real SinCity looks
like. Violence is like a snap of a whip, sudden and loud. The movie is
very stylish, but without trying to be so. It's just how these people
like to live their lifes. A lot has been said about acting and it is
true Mortinssen really delivers. All the auther actors are great too
though, there is no weak link in this movie.

Anyway the bottom line: The most authentic movie about Russian mobsters
that the west has produced so far. Furthermore I find the only aspect
in which it looses to the Godfather is scope. Although the movie is
complete I can not help, but to want for more. The best film I've seen
this year.