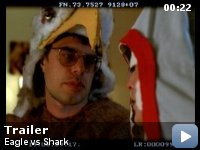 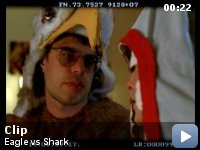 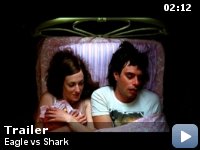 Eagle vs Shark is the tale of two socially awkward misfits and the strange ways they try to find love; through revenge on high-school bullies, burgers, and video games.

Storyline
Eagle vs Shark is the tale of two socially awkward misfits and the strange ways they try to find love; through revenge on high-school bullies, burgers, and video games.

Taglines:
There's someone for everyone…apparently

The script was workshopped at the exclusive Sundance Director's and Screenwriter's Labs.

Crew or equipment visible:
Approximately 45 minutes into the film as Jarrod asks Lily, Mason, and his daughter, "What's good to buy for girls?" you can see the reflection of film crew in his glasses.

Jarrod:
It's time to pay the piper. He's gonna reap what he sowed, and it sure ain't corn. Or wheat.


I just saw Eagle vs. Shark twice. I went to see it once, and thought it
was so awesome that I bought a ticket and went to the very next show. I
already know this is going to be one of my favorite movies.

Plain and simple, this is a very awkward love story. It doesn't have a
complicated plot, it doesn't have any complicated special effects, but
what it does have in abundance is comedy. If you're a fan of Monty
Python, The Young Ones, Kids in the Hall, The State, Andy Kaufman, Top
Secret, Will Ferrel, 1970's SNL– this is for you. It's that kind of
humor. If you're a fan of films Epic Movie, Eurotrip, Dukes of Hazzard
or more mainstream types of humor– this is not for you.

The second time watching it, I laughed almost harder than the first
time, because I kept finding even more details in the background to
laugh at. I can already see myself quoting this film with my friends:
"I'm too complex!" "She went to a lesbian party." And details like the
crazy burger (where the bun is on the inside and the hamburger patties
are on the outside) are just so priceless. I want to have an Eagle vs.
Shark party and make crazy burgers with everyone, play fightman, and
chuck shoes at my friend with a helmet.

But the main surprise of this film is also how emotional it is too. I
was laughing out of my seat for the first half hour, then I was
completely floored by how much I actually cared about these characters.
In this love story– you see these people who are absolutely perfect
for each other (or perhaps absolutely wrong for each other), as they
drift apart there's a true feeling of sadness for them. Most comedies
of this wackier sort don't actually make me care about what was
happening, and both times through I really felt for them.

But the best part is the ending. You might think this film is going to
wuss out– and it's actually unbelievable what happens. I won't ruin it
for you, but if you were like me, and an hour into the film had
predicted what was going to happen– you are mistaken! This film ends
with a bang and is just incredibly fulfilling. I'm smiling just
thinking about it.

I cannot wait to see what their next film is, because it's the ultimate
movie for my tastes. At the very least, I look forward to seeing this
film over and over again at midnight screenings and on DVD.