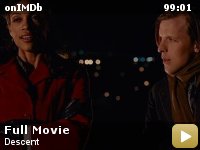 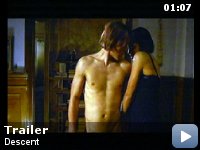 A college co-ed is brutally raped and struggles alone to rebuild her life.

Storyline
In the winter of her senior year, Maya talks to Jared at a frat party, accepts his invitation to dinner at a nice restaurant, then goes to his apartment, just to talk. He assaults her. Her personality changes, she's withdrawn; she graduates and takes a job at a clothing store, staying apart from co-workers. At night, she's someone else: a beauty at the club scene, dancing, seductive, sniffing cocaine, becoming the friend of a heavy hitter. She thinks about her racial identity. That fall, she's a grad student, and Jared is in an exam she proctors. She invites him to her apartment; he's certain she's stuck on him.

Yesterday I attended the world premiere of "Descent" at the Tribeca
Film Festival in NYC. I had a great time. It was sold out and attended
by all the major stars including fellow my-spacer Marcus Patrick.

The movie begins with Maya (Rosario Dawson) at college. You can
envision the typical college environment with wild parties and
flirtations going on. The photography in this film was excellent. She
meets Jared (Chad Faust) and they become sweethearts. It appears like
any other relationship in the beginning. The man is in quest of the
woman's attention and affection and the woman is playing hard to get.
Both played this well. Very innocent flirtation between the two. He
invites her to his apartment and everything falls apart.

The apartment is very dreary and dark. They eventually end up in the
basement which is extremely dark and lit by numerous candles. This
actually reminded me of a dungeon. Here is where he shows his true
colors and proceeds to rape her. This is a very dark and gritty rape
scene. This scene is not for the young or weak at heart. The rape scene
is a little long and hard to take, but it is necessary for the rest of
the movie that follows.

Maya now starts to lose her soul to drugs and sex. She falls into her
own abyss. She starts attending the wildest of parties and wakes up one
morning in a room with no recollection on how she got there. She is
told to go see Adrian (Marcus Patrick). The first thing I remember
about this character is that they say "he is the person who saves
anyone who needs saving". He is actually the one who introduces Maya to
drugs. They begin a relationship of dependency which comes into play
later in the movie. The club scenes at this point of the movie are
photographed with extreme expertise. I thought they were well done and
I noticed that the director of photography was applauded at the end of
the showing during the credits by the audience.

Maya is then back in college as a TA and who is in her class — Jared
her rapist!! You could see the confusion and emotion on Maya's face.
What should I do?? What do I do next?? The shots of her face and the
emotions are priceless.

What unfolds next is not actually whats happening. She acts interested
in Jared. She appears to be looking to revive the relationship and be
sweethearts again. I was sitting there saying could this really be
happening. It wasn't. Nothing could be farther from the truth.

She invites him to her apartment and of course, he shows up. Now her
apartment is dark and gritty. She has him strip down completely. He
thinks he's going to get "lucky". She then teases him like any woman
can. She's caressing him everywhere and he's getting excited. Note::
for anyone who plans on seeing this movie this scene is full frontal
nudity – may not be right for the younger viewer.

She then turns the situation around and she becomes the beast and
proceeds to rape him. Once again, the scene is dark, gritty, and very
rough.

If you are going to see the movie and don't want to know what happens
next, skip this paragraph and go on to the last paragraph.

This is where Adrian reenters the picture. Maya has Adrian save(?) her
by performing extremely rough male sex with Jared. She thinks this is
the final revenge. Adrian continues to take all of Jared's manhood and
strips his dignity to nothing. Marcus, as Adrian, plays this scene as
believable as anyone can. He is a strong actor playing a strong
character and the strength comes out all over the screen. After the
movie, during a Q&A session, Marcus explained that this scene required
a lot of trust between him and Chad. Maya believes that this revenge
will save her but I don't think it does. One of the final scenes has a
closeup of Mays's face and you see a tear roll down her cheek. This was
a fabulous closeup scene and evokes constant discussion from anyone who
goes to see this movie. Did she get the revenge she wanted?? Was it as
satisfying as she expected?? In my opinion, it does not. It only makes
matters worse.

This is an excellent movie, will well acted roles, and I recommend it
to anyone who is thinking about going to see it. I would just be a
little hesitant if under 17 years of age. Rosario, Chad, and Marcus
should be commended for jobs well done. The directing and photography
must also be commended. It was a night that I enjoyed.