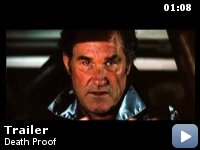 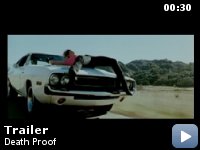 Two separate sets of voluptuous women are stalked at different times by a scarred stuntman who uses his "death proof" cars to execute his murderous plans.

Storyline
In Austin, Texas, girlfriends Julia Lucai, Arlene, Shanna and Lanna Frank meet in a bar to drink, smoke and make out with their boyfriends before traveling alone to Lake LBJ to spend the weekend together. They meet the former Hollywood stunt man, Mike, who takes Pam out in his "death-proof" stunt car. Pam soon discovers Mike's secret. Fourteen months later, Mike turns up in Lebanon, Tennessee. Abernathy "Abbie" works in the make-up department on a film set. Zoë Bell, Kim and Lee are all chased by him but the girls are tough and decide to pay-back the attack.

In an interview, Quentin Tarantino said that the version of "Down in Mexico" heard in 'Death Proof' was likely the rarest recording in his entire collection. When he was working at a stag theater in his teens, he showed the record to the projectionist, another record collector, who immediately pointed out the words "Newly Recorded" on the record's label. Tarantino said this version soon became one of his favorite tracks of all time.

Factual errors:
In the closing credits, The Austin Chronicle, is misspelled as "Cronicle."

Arlene:
[shouting to Jungle Julia]
Hold on, I gotta come up! I gotta take the world's biggest fuckin' piss!

Probably the most misunderstood film of this decade


Given the vast majority of major criticisms levelled at this film, it
would appear that a large percentage of the audience has completely
missed the joke, or simply, didn't find it at all amusing. With Death
Proof (2007), Tarantino creates such a loving homage to a notoriously
cult cinematic sub-culture that many people seem unaware of how to
approach it or even how to appreciate the sheer fact that the film
purposely goes out of its way to ape the style of late 60's and early
70's exploitation cinema in look, feel and content. The film isn't
meant to be taken entirely seriously, but rather, is a parody and/or
pastiche of the kind of films that the vast majority of mainstream
audiences simply wouldn't want to see. I'm talking about films such as
Two-Thousand Maniacs (1964), Ride the Whirlwind (1965), Manos: The
Hands of Fate (1966), Satan's Sadists (1968), The Big Bird Cage (1971),
Boxcar Bertha (1972), Fight for Your Life (1977) or Satan's
Cheerleaders (1977); low-budget films made with often-non-professional
actors, little in the way of conventional film logic, and highly
controversial in terms of plot, theme and content.

It also sets out to pastiche the "grindhouse" cinema phenomena, with
the original idea of two films being shown as a double feature at
drive-in movie theatres from state to state, with both films often
being re-cut and re-edited, not by the filmmakers, but by the theatre
owners themselves. This is evident in the amusing switch in title; with
the film opening with the caption 'Quentin Tarantino's Thunderbolt',
before awkwardly cutting to an obviously out of place title card with
'Death Proof' crudely emblazoned across the screen. This is also the
explanation for the purposeful mistakes in continuity, the sloppy
editing and the switch between colour and black and white, as well as
the façade of severely deteriorating film stock. It's not sloppy
film-making, but rather, a purposeful appropriation of sloppy
film-making geared towards appealing to the kind of obsessive movie
aficionado who gets the references and can appreciate the joke that
Tarantino is attempting to pull.

With this in mind, it seems hard to understand what people are
complaining about. Do audiences actual expect this film to keep them
enthralled and entertained when the vast majority of them would balk at
experiencing many of the low-budget, semi-obscure films that influenced
it? Hardly! The accusation here that "nothing happens" is fascicle. The
fact that there is film running through the camera is proof enough that
something is happening, with the hilariously bland dialog
deconstructing the film in much the same way as the purposely
amateurish composition, editing and sound all intended to fracture the
cinematic language in the same way that Godard did; by reminding the
audience that this is the film and the point of the film is to
experience the sights and sounds that unfold before us. Added to this
the colourful iconography, the music, the characters, the girls in
tight t-shirts, the for once entirely justified performance from the
man himself, all reminding us that this is a joyous, darkly comic romp
in which the point is not "why?" but "why not?".

The effect is reminiscent of Kill Bill (2003), which at times felt
superficial or perhaps even too knowing for its own good, but still
demonstrated to us the filmmaker's great use of tone, texture, colour
and movement, as well as turning many people on to a whole new world of
cult Japanese cinema; from the works of highly individual filmmakers
like Seijun Suzuki, Kinji Fukasaku and Takashi Miike, to cult
performers like Sony Chiba. Death Proof attempts to do something
similar with the likes of the American revisionist road movie, the
B-cinema of Roger Corman and the femsploitation subgenre of films like
The Big Bird Cage (1972), Caged Heat (1975), Day of the Woman (1978)
and Ms. 45 (1981); a coolly ironic series of films in which wronged
women take bloody revenge in an often elaborate and over the top style,
chiefly intended to give a feminist slant to the still rampant
degradation and misogyny prevalent in the exploitation genre.

Other reference points are more obvious as they're mentioned explicitly
in the film; notably car chase cinema such as Vanishing Point (1971),
Two-Lane Blacktop (1971), Dirty Mary, Crazy Larry (1974), Gone in 60
Seconds (1974) and even Spielberg's Duel (1971). Some have complained
that the film fails on account of its lack of action and emphasis on
dialog and technique, but this seems churlish when you think of the
films being referenced; with Vanishing Point featuring a number of
cryptic, desert-set sequences in which characters talk and talk and
talk, while Two-Lane Blacktop punctuates its scenes of hard driving and
drag-racing with much in the way of meandering small-talk. Then we have
the fact that films like Reservoir Dogs – which takes place almost
entirely within a single setting – and Jackie Brown – which places
emphasis entirely on character – use dialog to not only create the
characters but to also tell the story.

Regardless of this, Death Proof is meant as a piece of entertainment.
There's no real desire here for Tarantino to prove what kind of
filmmaker he is because he's already done that with the number of great
films that came before. Sure, it can be seen as self-indulgent, but
surely those of us familiar with the style of film-making being
referenced here will revel in this particular kind of extravagance,
loving everything from the continually inane female banter to the
awesome scenes of high speed carnage. If you're not a fan cult cinema
or exploitation cinema or indeed a devotee of Tarantino's work then
this film really isn't going to impress you. There's no shame in that.
Some films are made for a niche audience, destined to be a cult in
their own right. However, for those who get it, Death Proof has the
potential to be a truly exhilarating, one-off piece of film-making.