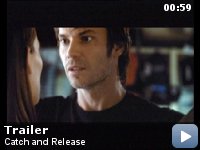 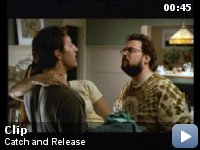 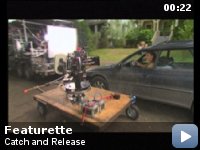 A woman struggles to accept the death of her fiancé and the secrets he kept from her as she rebuilds her life.

Storyline
After the sudden death of her fiancé, Gray Wheeler finds comfort in the company of his friends: lighthearted and comic Sam, hyper-responsible Dennis, and, oddly enough, his old childhood buddy Fritz, an irresponsible playboy whom she'd previously pegged as one of the least reliable people in the world. As secrets about her supposedly perfect fiancé emerge, Gray comes to see new sides of the man she thought she knew, and at the same time, finds herself drawn to the last man she ever expected to fall for.

Taglines:
Life is messy…love is messier.

Although this is not a Kevin Smith film, almost all of Smith's trademark elements can be found in it. There's the "sh" joke (he says "fancy, shmancy"), the number 37, reference to comics and superheroes and references to
Star Wars: Episode IV – A New Hope.

Continuity:
A plate Sam is holding in his right hand momentarily disappears, then reappears, in the scene at the peace garden dedication when Dennis tells Sam he is planning to move out.

Caterer:
Sock it to me!


I saw "Catch and Release" a couple of months ago, the first screening,
writer-director Susannah Grant said, of the final cut. It was a very
friendly audience, but watching the movie, I couldn't help but feel
Grant could have and should have done better.


The film opens promisingly, teasing us and playing with our
expectations as we first see Gray (Jennifer Garner) and the
circumstances she finds herself in. However, Grant never quite builds
on that initial promise and soon "Catch and Release" meanders into
traditional romantic comedy territory, complete with the obligatory
playful and lovable sidekick – in this case, Sam (Kevin Smith) – and
the friend harboring a romantic secret of his own, Dennis (Sam Jaeger).

The crux of the story is Gray's realization that her life is being
turned upside down because of what she finds out about a loved one. And
– I'm giving away no secrets here, because it is, after all, a romantic
comedy – the blossoming romance between her and Fritz (Timothy
Olyphant), who at first is seemingly wrong for her. But wanna guess if
that will change?

The star of the film is undoubtedly Garner. Just as she did in "13
Going on 30" (2004), she again takes what should be a pedestrian film
and boosts it considerably with her undeniable charm. She has a smile
that melts the hardest heart and although "Catch and Release" can never
shake its conventions, whenever the film entertains, it's mostly
because of Garner. She imbues Gray with a vulnerability that's utterly
convincing.

Smartly, Grant also gives Smith – essentially playing himself with
cleaner language – the film's funniest lines. They're not anything
novel, but it's typical Kevin Smith. She also tags on a romantic
interest for Sam. It's no surprise, because Grant cannot break the
shackles of the genre for something original. You can see the pairing
long before it actually happens on screen.

Juliette Lewis seems an oddity in this film. I've not seen her in a
film for years and her character tends to grate a bit. Lewis is a good
actress, but she seems to get typecast in these off-kilter roles and
there's an unmistakable sense we've seen this performance from her
before.

Olyphant plays sleazy well – just watch him in the
otherwise-forgettable "The Girl Next Door" (2004). In "Catch and
Release," his caddish boor actually is a facade. Turns out, this chap's
actually a nice guy. He has to be. After all, he has Gray to win over
and Grant's doing this by-the-numbers.

And therein lies the film's problem. Despite Grant's admirable attempt
to spin the romantic comedy's meet-cute moment, it's hard to believe
Gray would fall for a chap who, for the lack of a better phrase, finds
carnal comfort at the most unlikely occasions.

Of course, "Catch and Release" has a certain sweetness about it. How
can it not when Garner's so adorable. It's polished, looks good; a cut
above, say, the odd independent romcoms that tackle the trials and
tribulations, the angst and adoration among a group of good friends.
But it offers nothing new and relies on a few too many "movie" moments
to elicit laughs. Some of those moments are funny, but you get the
impression they're not exactly rooted in any realm of reality. Yet,
Grant seems to want to lend her story a sense of reality, one that
deals with love, loss and forgiveness.

Grant said when she recut her film, she was forced to excise some of
Fritz's back story. It doesn't seem warranted, but there seems to be
something missing from Fritz. We know the story's moving to get Gray
and Fritz together – this is a freakin' Hollywood studio-produced
romantic comedy, after all – but it all seems too orchestrated from the
beginning.

Is it too much to ask a Hollywood romantic-comedy writer to be even
slightly daring? Hollywood-produced romantic comedies, by their very
nature, are predictable. You know going in the girl and the guy will
wind up together, so it's the journey that is supposed to thrill us.
Maybe even surprise us. Grant, however, chooses the safest, and
therefore, least surprising, path. She hits all the points a screen
writing guru without an ounce of originality would demand be seen in a
romcom script. The only novelty here is that Grant got some attractive,
appealing and talented actors for her directorial debut. It is they who
keep this extremely conventional story from turning unbearable. Though,
even Garner's considerable cuteness cannot salvage the film's ending.