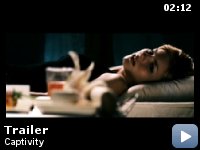 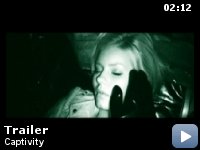 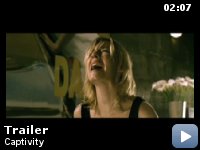 A man and a woman awaken to find themselves captured in a cellar. As their kidnapper drives them psychologically mad, the truth about their horrific abduction is revealed.

Storyline
Top cover girl and fashion model, Jennifer Tree has it all – beauty, fame, money and power. Her face appears on covers of hundreds of magazines. At the top of her game, Jennifer is America's sweetheart. She is loved and adored and sought after. Everyone wants her. But someone out there has been watching and waiting. Someone wants her in the worst way. Out alone at a charity event in Soho, Jennifer is drugged and taken. Held captive in a cell, Jennifer is subjected to a series of terrifying, life-threatening tortures that could only be conceived by a twisted, sadistic mind. It follows the story of one woman who is abducted and tortured, held against her will in a place where days turn into weeks.

The initial advertising campaign for Captivity featured a multi-paneled poster. The first panel was labeled "Abduction," featuring actress Elisha Cuthbert appearing petrified, her mouth covered by a black gloved hand. The second panel was labeled "Confinement" and showed Cuthbert behind a chain-link fence with a bloody thumb poking through. The third was labeled "Torture" and featured Cuthbert on her back, her face hidden within a white cast and red tubes going up her nose. The fourth panel was labeled "Termination" and featured what appeared to be a limp body hanging over a table. The poster was placed on several billboards across Los Angeles, causing a significant uproar and resulting in many complaints. Distributor Lionsgate – who were not involved in the film's advertising campaign and claimed to know nothing of the poster in question before the posters were distributed – and producer After Dark Films ultimately decided to remove the controversial poster from the advertising campaign and took the billboards down.

Continuity:
Right after the car goes forward and rams the garage door, the view from inside the car when it starts to back up shows an undamaged door.

Ben:
Another night of hero sex?

Stunning visuals save a troubled script


What Captivity lacks in innovation it makes up for in style. Say what
you will about plot holes and struggling performances, but the film
looks beautiful, sounds great, and the atmosphere of the film will stay
with you. Elisha Cuthbert's character is shallow, but appropriately so,
as a naive fashion model who, even while in the deepest pit of
misfortune, doesn't quite grasp what's going on. She keeps close to her
teddy bear, apologizes for no apparent reason, and cries single
tears… never ceasing to look picture perfect. (This is one gripe I
have with the film. The leading lady should show a little more wear and
tear, in my opinion.) I understand that the writer of Captivity claims
to have based the character on Paris Hilton, and while I don't entirely
believe that that's what the film was aiming for, it's an interesting
comparison. In light of Hilton's recent incarceration, it's also a bit
of commentary, however unintentional, on our culture's fascination with
celebrities, the desire to be close to them, and to possess a piece of
them.


The looming, black gloved torturer is a smidge cliché, but it does the
trick. It's a genre film, and certain symbols are to be expected and
forgiven. Again, the set and sound design are spot-on, and that carries
a lot of weaker areas through to the end.

The editing is very choppy, due in part to the fact that a large
portion of the original movie was removed and replaced with new
material shot long after the original version ended production. The
result is a cut-and-paste appearance which actually works quite well,
given all the time Cuthbert's character spends going in and out of
consciousness. It's almost an art film effect, hypnotic and
disorienting.

TagsUSA
Harry Potter and the Order of the Phoenix
Hairspray