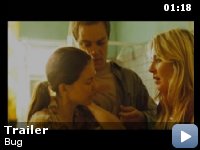 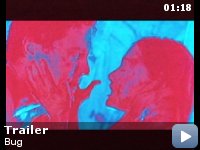 An unhinged war veteran holes up with a lonely woman in a spooky Oklahoma motel room. The line between reality and delusion is blurred as they discover a bug infestation.

Storyline
Having escaped her abusive ex-husband Goss, recently released from state prison, Agnes, a lonely waitress with a tragic past moves into a sleazy, rundown motel. Her lesbian co-worker R.C. introduces her to Peter, a peculiar, paranoiac drifter and they begin a tentative romance. However, things aren't always as they appear and Agnes is about to experience a claustrophobic nightmare reality as the bugs begin to arrive…

Taglines:
First they send in their drone… then they find their queen.

During the shoot, many of the crew members got rashes from bed bugs in their hotel rooms.

Continuity:
Throughout all the scenes in the motel where the bathroom is visible, we see that the bathroom door is a regular standard door. But in the scene when Peter is removing a tooth, as he goes to enter the bathroom the door changes into a double louvered door. Then changes back to the regular door in later scenes.


Certainly not for everyone…but if you appreciate completely unique
and intense cinema…check it out. I am so impressed by Ashley Judd,
who I always liked, but had no idea of her range and courage. The film
is very disturbing…I would describe it as a dark comedy that gets
darker and darker and darker…calling it horror is too limited
although there are horror elements to it. It reminds me of Cronenberg
or early Polanski (Repulsion). But comparisons don't really do it
justice. It's exciting to see that there are directors that still have
guts. I was exhilarated and disturbed by the end of this film. I
recommend it highly to anyone who wants something different and
powerful.