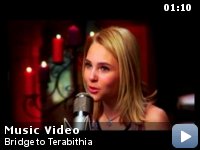 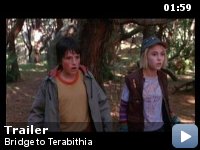 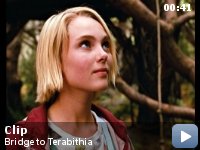 A preteen's life is changed after befriending the new girl at school.

Storyline
Jesse Aarons trained all summer to become the fastest runner in school, so he's very upset when newcomer Leslie Burke outruns him and everyone else. Despite this and other differences, including that she's rich, he's poor, and she's a city girl, he's a country boy, the two become fast friends. Together, they create Terabithia, a land of monsters, trolls, ogres, and giants and rule as king and queen. This friendship helps Jess cope with the tragedy that makes him realize what Leslie taught him.

The cafeteria scene at the museum was shot about midnight.

Leslie Burke:
…I check my air. I don't have as much time as I need to see everything, but that is what makes it so special.

"Terabithia . . . enthralls and absorbs the viewer in the magic of imagination and the reality of every-day life.

It is hard to put into writing just how marvelous and wonderful Bridge
to Terabithia really is, yet as I attempt it, I can't help feeling
disturbed at how ridiculous people are being about the marketing of
this film. Thank goodness most real critics have looked past the
agreeably deceptive marketing, into the heart and beauty of this film,
which, with or with the misleading advertisements is impressive. After
seeing it, I struggled to think of a better way of marketing this film,
without giving away its ending or taking away the only audience that
still seems to watch PG movies, kids.

After watching it, however, I couldn't imagine taking anyone under ten
to see it, nor could I imagine anyone under ten enjoying it as much as
young adults, or even older audiences would. So, as deceptive as the
advertising was, I myself realize that the fascinating story, the charm
and skill of the actors, and the good direction of newcomer to live
action film-making, Gabor Csupo, more than makes up for the slightly
skewed first impressions. And I am eternally grateful that it did not
turn into what everyone seemed to want, a cheesy Narnia rip-off. If
anything, the movie was a lot better than the preview made it seem to
be, and I was pleasantly surprised.

Instead of the brash and rude approach to filming movies, that seems to
be the standard today with effects driven movies, Terabithia focuses on
the characters, the story, and the heart when telling this beautiful
tale. Which, is part of the reason why I enjoyed it so much. Too often
now days the story is built around the effects, not around the
characters. A rather cumbersome and annoying way to tell a story, or be
told a story, if you ask me. Instead, Terabithia uses the talents of
both the amazing young actors, and its adult cast to enthrall and
absorb the viewer in the magic of imagination and the reality of
every-day life.

The story focuses on young Jess Aarons, whose school life and home life
aren't all that ideal. He deals with bullies at school, and four
sisters at home. Josh Hutcherson, who I haven't particularly enjoyed
before, plays the part of Jess perfectly, his emotions and reactions
spot on, throughout.

What is a school without the new girl? Leslie Burke, played by
AnnaSophia Robb, takes on the part of the imaginative and friendly new
girl and brings to Jess gifts of imagination and friendship. Robb truly
does a superb job in bringing to life the thoughtful and imaginative
Leslie Burke.

All of the supporting cast was also brilliantly portrayed. I especially
enjoyed the performances of Robert Patrick as Jess's father, and young
Bailee Madison as Jess's little sister May Belle.

What really struck me as brilliant was the limited, yet still perfect
number of glimpses into the children's' imaginations. We don't see a
lot of Terabithia, which is good, because it is more about the journey
of the characters, than the land of Terabithia. That said, it still has
quite a few more scenes of adventure than the book by Katherine
Patterson, all of which add to, not take away from the story.

The writing, also is quite good. David Patterson, son of the novel's
author takes great care when adapting the beloved work of his mother
into a screenplay. Most of the lines from the book aren't there, but
there are a few which make it in, revealing the care and love that was
put into the scripting of this movie. Personally, I enjoy the
screenplay of the movie more than the words of the book, but that is
just my opinion. The movie's script greatly aided in the believability
of the characters, and the motion of the scenes, which were crisp and
well-planned.

The movie touched on my every emotion, bringing me to tall peaks of
happiness and leaving me teary-eyed and disconsolate, but still had a
perfect and satisfying ending. I also, personally thought, the scenes
and situations were more powerful, poignant, and realistic, than the
book, which surprises me. Usually, the movie can't live up to the book.
In this case, the phrase seemed switched around. The book didn't live
up to the movie. As weird as it is for me to say this about a movie,
Terabithia touched my heart like no film has ever before. And I doubt
any film will give me quite the same feeling, ever again.