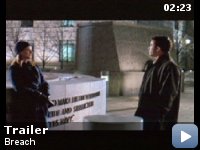 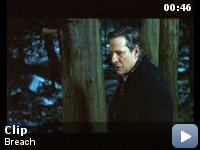 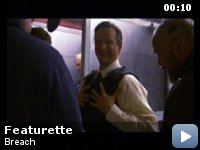 Based on the true story, FBI upstart Eric O'Neill enters into a power game with his boss, Robert Hanssen, an agent who was ultimately convicted of selling secrets to the Soviet Union.

Storyline
In February, 2001, Robert Hanssen, a senior agent with 25 years in the FBI, is arrested for spying. Jump back two months: Eric O'Neill, a computer specialist who wants to be made an agent is assigned to clerk for Hanssen and to write down everything Hanssen does. O'Neill's told it's an investigation of Hanssen's sexual habits. Within weeks, the crusty Hanssen, a devout Catholic, has warmed to O'Neill, who grows to respect Hanssen. O'Neill's wife resents Hanssen's intrusiveness; the personal and professional stakes get higher. How they catch Hanssen and why he spies become the film's story. Can O'Neill help catch red-handed "the worst spy in history" and hold onto his personal life?

Taglines:
How one man betrayed the security of a nation.

Continuity:
The Dell laptop and LCD monitor that Robert has in his office, when he shows Eric a movie clip with Catherine Zeta-Jones, was manufactured after 2001. While driving on Wilson Boulevard, the license plate on the back of the black SUV Eric is driving is a Virginia plate. In the traffic jam in the next scene, the license plate on the front of the SUV is clearly a Washington DC plate.

John Ashcroft:
[news clip]
Sunday, the FBI successfully concluded an investigation to end a serious breach in the security of the United States. The arrest of Robert Hanssen, for espionage, should remind us all, every American should know, that our nation, our free society, is an international target, in a dangerous world.

Loved it, but O'Neill wasn't an FBI Special Agent


I keep reading comments referring to O'Neill as an FBI Agent. Eric
O'Neill was never an FBI Agent, but rather just a support employee.
That's part of what makes this movie so exciting with an almost "David
and Goliath" quality. O'Neill was thrust into one of the most important
cases in FBI history with virtually no undercover experience. His
ability to hang in there and keep his cool in the midst of that stress
and strain was simply amazing and he deserves a lot of credit.


This movie was a very accurate portrayal of the FBI culture and the
events which took place regarding the investigation and arrest of
Robert Hanssen. They even got the look of the HQ interior down pat.

There are a few *very* minor inaccuracies.

1) The FBI does not have mailboxes outside their office doors. 2) The
real parking garage is a lot shabbier looking than the one in the
movie. 3) There is no policy against FBI Agents drinking in their
personal lives. 4) There is no "25 Year" wall. 5) Dennis Haysbert's
character of Dan Plesac was introduced as "FBI Assistant Special Agent
in Charge" as if it were a big deal. It's not. An ASAC is one step
above a Supervisor. Now, if he'd been introduced as "FBI Assistant
Director" that would have been a much higher status position.

But everything else in the movie was amazingly accurate. As usual, do
not rely on Wikipedia for your facts. I read it and there are some
blatant mistakes in there.