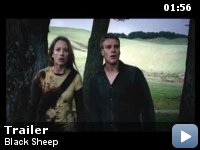 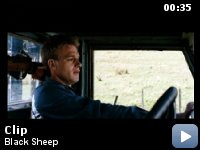 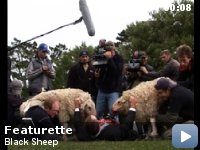 Storyline
Growing up on the family sheep farm was idyllic for smart, sensitive Harry Olfield, except for some knavish mischief from cocky brother Angus, until their dad has a fatal accident. Fifteen years later, Harry has finished sheep-phobia therapy and his ICT schooling and returns. Angus buys him out, all ready to present the genetically engineered Oldfield sheep he bred with a ruthless team. When environmentalist Grant steals a discarded embryo, which has sharp teeth, he gets bitten by it, and thus the first the be infected with predatory hunger and a mechanism that turns any mammal into a werewolf version. Running for the farm men, Grant's mate, student Experience, gets teamed up with Harry and his boorish but gentle pastoral youth friend Tucker. They must survive both the bloodthirsty sheep and their creators, who didn't realize this yet but dispose of an antidote.

Taglines:
There are 40 million sheep in New Zealand… and they're pissed off!

The man who is pulled down by a sheep while trying to find the keys to his car is the director, Jonathan King.

Continuity:
When they're in the house getting attacked by weresheep-Grant, the digital clock in the background goes from "3:12" to "3:11" in a later scene.

Henry:
Are you OK?

Experience:
I won't be OK ever again.


After reading an extremely negative review of this, which COMPLETELY
missed the point, I thought I'd write a far more 'accurate' review. In
my opinion, this is one of the best of this type of horror movie i've
seen. It's right up there with Peter Jackson's early work and Evil
Dead. All the negative things the other reviewer was saying, the poor
dialogue, and acting, the unrealistic effects, were deliberate, after
all, the effects were done by highly skilled and trained effects people
at WETA Workshops – who of course did Lord of The Rings. It is a horror
comedy packed with clichés and subtle allusions, and full of New
Zealand humour, which i concede probably doesn't translate well
internationally. NZ is primarily a farming nation, we're a huge
exporter of lamb, Farming is a huge part of our culture, and this
blends that with our history of offbeat, slightly dark, and
idiosyncratic cinema. It is a clever, quintessentially kiwi, homage to
such previously mentioned horror comedies (or comedic horrors). That's
what i like about it, it is a lot cleverer than it looks. I thoroughly
enjoyed every minute of the film. If you like Peter Jackson's early
stuff, you'll like this. Just don't expect it to be s***-your-pants
scary.