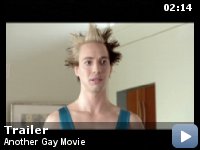 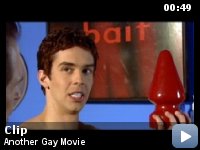 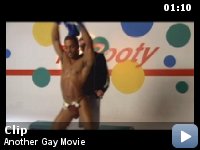 Four gay high school friends make a pact to lose their virginity before they go to college.

Storyline
The film revolves around four gay teenagers: curious Andy, flamboyant Nico, jock Jarod, and geeky Griff. These four boys want to have sex, but can't find anyone to do it with. It's their graduation day and their lesbian friend Muffler's having her graduation party. The next morning, the boys make the pact to have sex before the end of the summer. Andy has his eye on the math teacher Mr. Puckov, Nico searches the Internet for a man, Jarod falls for a rival baseball player, and Griff is deciding within his crush on Jarod or his exercise teacher. In the tradition of "American Pie", "Another Gay Movie" will bring you hysterics.

In one scene, Nico's mother shows him a video where he, as a child, did an impersonation of actress Karen Black in
Airport 1975. Karen Black appeared in director Todd Stephens' previous film,
Gypsy 83.

Continuity:
After Griff's confession to Jarod at Muffler's Labor day party, we see a fully clothed Griff jump on a completely naked Jarod. In the next scene, we see Griff striping off his clothes, along with Jarod, who is completely dressed again.

Bonnie:
I was sure you lead an alternative lifestyle, the first time you did Madonna. I mean cripe! How many three year olds can say they performed her entire Blonde Ambition concert! Oh! Strike a Pose! Remember?
[Home video footage of 3 year old Nico dressed as Madonna]

Bonnie:
I'd admit though, I did start to suspect a lot earlier. See how you already had that little swish in your step?
[Home video of toddler Nico wearing heels]

Bonnie:
Oh yeah. You were always mommy's special boy. There you are at your first rock concert. Carol Channing was on FIRE that night. And that's the time you dressed up like Karen Black in Airport 75 when we flew to Florida! THERE'S NOBODY FLYING THE PLANE!
[…]

Um – I laughed and laughed – doesn't that mean it was good?


I mean – I'm a fairly harsh critic and I hate most every gay movie that
comes out (I'm gay BTW) and I was poised for this one to annoy the crap
out of me. But it started and I'll tell you – I was wiping away the
tears (from laughter) from pretty much the opening sequence. The four
men they found for the four leads were astoundingly, shamelessly
gleeful in their complicated renderings of these boys – they didn't
phone anything in – even the gratuitous (I'm a littly prudish, I guess)
flatulation sequence was imbued with a sincerity and a sweetness that
was welcome and unexpectedly necessary and it made it actually,
genuinely funny. That doesn't happen often with flatulation jokes for
me. And I think that description defines the entire film for me – it
was unexpectedly inspired and made me laugh when I wouldn't have
typically. And I cried, too – for the sweetness of one story line. I
usually feel manipulated and ridiculous after a romantic comedy but
something happens in this film that brings it home – I wasn't angry and
I wanted it to go on and on and on. As a gay film buff I guess it was
hugely satisfying to see the same stupid movie I've seen seven thousand
times about straight people remade – and reconsidered – and turned into
something that I could claim as my own. I got it – and I don't usually
get to get it. It's a special hour and a half – I hope everyone gets to
see it.