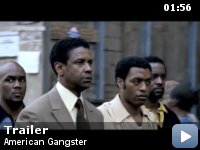 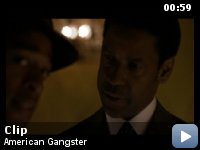 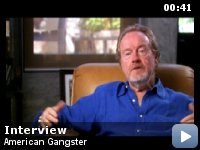 In 1970s America, a detective works to bring down the drug empire of Frank Lucas, a heroin kingpin from Manhattan, who is smuggling the drug into the country from the Far East.

Storyline
Following the death of his employer and mentor, Bumpy Johnson, Frank Lucas establishes himself as the number one importer of heroin in the Harlem district of Manhattan. He does so by buying heroin directly from the source in South East Asia and he comes up with a unique way of importing the drugs into the United States. As a result, his product is superior to what is currently available on the street and his prices are lower. His alliance with the New York Mafia ensures his position. It is also the story of a dedicated and honest policeman, Richie Roberts, who heads up a joint narcotics task force with the Federal government. Based on a true story.

Taglines:
There are two sides to the American dream.

Antoine Fuqua was originally set to direct this project in 2004 with Denzel Washington and Benicio Del Toro starring, but production was halted one month before shooting after Universal Pictures canceled the film over budget concerns. However, Washington and Del Toro received their salaries nonetheless. A pay-or-play deal was stipulated in both of their contracts that Universal would pay Washington $20 million and Del Toro $5 million regardless of whether the film was made or not. Once this project was green-lit by Universal a second time, under Ridley Scott's direction, Washington returned to the project without an upfront fee. He also received half of his $20 million salary for the previous year's
Inside Man, another Imagine Entertainment production.

Detractors of this film were fooled by the trailer.


American Gangster has been really hated upon in many of the former
posts I have read. Yet it seems like they are all saying the same
thing, that Gangster didn't have enough action and was really drawn
out. Anyone who has every seen a Ridley Scott film will know that his
films are long! Blade Runner, A Good Year, Matchstick Men, Hannibal,
Black Hawk Down, Gladiator, G.I. Jane, Thelma and Louis, and Alien all
ran for at least two hours or more, so big surprise there guys. In
addition Scott didn't set out to film another scarface, he set out to
tell a story not just about Frank Lucas but rather a tale of corruption
and how pervasive it is. One user commented that this film had many
side story lines that "bloated" the story. This is completely untrue as
every "side story" is actually the overarching story about the fight
against corruption in every facet of life, even Frank Lucas attempts
several times to eradicate the corruption in his organization.


Over all this is a great film which really gets into every nook and
cranny of an issue. Don't see this film if your just looking for cheap
thrills, this is a thinking film about the pervasive dishonesty of our
culture.

I gave this film 8 stars because i could find nothing solid that
detracted from it, but rather a slew of minor details which gradually
brought its score down. But I will put this film in my top films for
the year, if only because I have been immensely unsatisfied with the
bulk of releases this year.