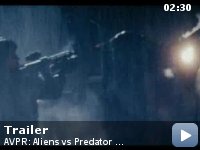 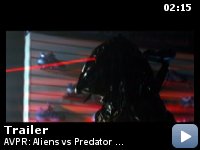 Warring alien and predator races descend on a small town, where unsuspecting residents must band together for any chance of survival.

Storyline
In Gunnison County, a spacecraft crashes in the woods bringing a powerful hybrid Alien hosted inside the pilot Predator. A local, Buddy Benson, and his son, Sam, are hunting in the forest and witness the crash, but they are chased and killed by the Alien. Meanwhile another Predator lands on the spot seeking out the Alien and destroys evidence of their presence on Earth. The dwellers of the town find themselves in the middle of a battlefield between the two deadly extraterrestrial creatures, and the small group of survivors splits between the leadership of Sheriff Eddie Morales and the bad-boy Dallas Howard. Both have different opinions about the best means to escape from the beings.

Taglines:
This Christmas there will be no peace on Earth.

It was decided at an early stage that this movie would be R-rated as "it is what the fans want from the series".

Errors in geography:
Although some scenes of the film take place in the sewer system underneath Gunnison – no such system exists. The Gunnison sewer system is limited to piping, and does not include underground catwalks.

Buddy Benson:
OK, now, take your time. There you go.

From what I understand, Fox was embarrassed they released a PG-13
Alien/Predator movie not so long ago. It was not well received by any
means.

Not exactly sure where to go next, seeing as they thought Anderson was
the best director for the franchise and they had produced a true sci-fi
gem, Fox turned to it's small, but knowledgeable group of monkeys for
answers.

These monkeys were by no means veterans of writing sci-fi flicks, but
had seen Burton's Planet of the Apes remake and House of the Dead.

Their first task: hire actors. Fox gave them a reasonable budget but
the monkeys wanted to save the money. They hired fifteen TV actors
shortly after.

Now, the script. The monkeys wanted to save more of the budget so they
wrote the movie themselves. Leaving out important aspects of the two
franchises was the easy part. Thinking of great new lines for the
general audience to remember years down the line – that was more
difficult. They butted heads awhile and came up with a truly
award-winning screenplay equipped with cliché characters, idiotic
decisions an gaping plot holes.

Fox was pleased thus far with the results but wanted to see what was to
become of the centerpieces to the film – the aliens and predators. The
monkeys again wanted to save money in the budget so they decided to
trash the great robotics used in the otherwise terrible AvP original
and go with the man-in-the-suit Alien seen in the old films. The actors
playing the aliens had trouble fitting into the suits as they weren't
properly sized by the monkeys so they jiggled their plastic heads
throughout the film with honor. As for the predators, the monkeys
decided one predator was enough this time around (again, saving budget)
to fight the hordes of aliens that seemingly come out of nowhere.

But what about the effects, you ask? Come on now, people. They may be
monkeys but they clearly knew CGI would play a key role in the film.
Without diving into the budget, the monkeys used a standard Final Cut
program and cut and pasted some very nice fire and spark effects
throughout. Putting red and green filters over the camera lens provided
some excellent Predator visions.

The setting was something the monkeys thought long and hard about. If
this was to be on Earth, in Colorado of all places, they needed to make
it realistic. This was where they admitted they might have made a
mistake. See, the monkeys didn't have proper training in this
department so they thought turning the lights off in the city and
having the movie play out in the dead of night and in the rain was the
right thing to do. They simply forgot people like to see the creatures
instead of looking at shadows and rain the whole film. To add insult to
injury, the monkeys accidentally filmed all the fight scenes incredibly
close so no one could see what was fighting or who it was. But again,
rookie mistake.

The rating. Fox told the monkeys to make the movie R-rated. That was
easy. Without showing how many of the injuries or deaths actually
happened, the monkeys made a habit of showing the carnage after the
fact. It was simple: the viewers got the gore they desired and the
monkeys didn't have to film the majority of action shots involving that
violence.

Some of the actors originally had questions concerning the screenplay.
Why does a blue liquid the Predator has endless amounts of magically
disintegrate whatever he wants it to and nothing more than that? Why is
an ex-convict driving around in a police car the entire movie? Why did
the monkeys forget to show a full body shot of the Aliens? Why does a
clock play a more memorable role than any of the main characters? The
list of questions just kept growing but the monkeys ignored them and
finished their masterpiece.

Fox was thrilled with their work. So thrilled that they opened the
movie nationwide on Christmas Day and even spent a few bucks
advertising it the week before it came out. The monkeys had
successfully made another installment in these cherished franchises.

But some ask, what ever happened to the budget the monkeys forgot to
use? They put it towards their next film: Aliens vs. Predator vs. Hulk
Hogan. They knew the general public would be upset with the title but
they have since released this statement:

"To the people- do not worry about our upcoming film. It will be rated
R and will have violence."

And everyone lived happily ever after. The end.