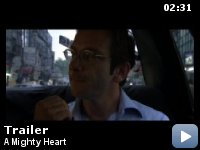 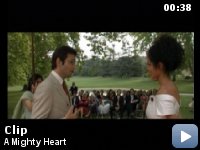 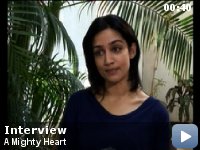 Mariane Pearl embarks on a frantic search to locate her journalist husband, Daniel, when he goes missing in Pakistan.

Storyline
On January 23, 2002, Wall Street Journal reporter Daniel Pearl is to fly from Karachi to Dubai with his pregnant wife, Mariane, also a reporter. On the day before, with great care, he has arranged an interview in a café with an Islamic fundamentalist cleric. When Danny doesn't return, Mariane initiates a search. Pakistani police, American embassy personnel, and the FBI examine witnesses, phone records, e-mails, and hard drives. Who has him? Where is he? There's also the why: because of U.S. abuse of prisoners at Guantanamo, because of a history of Journal cooperation with the CIA, because Pearl is a Jew? Through it all, Mariane is clearheaded, direct, and determined.

Taglines:
It was an event that shocked the world. This is the story you haven't heard.

Initially, the film was financed by Warner Brothers. After it backed out, Paramount Vantage stepped in.

Errors in geography:
Since a lot of the movie was shot in Pune and Mumbai, a lot of scenes actually show taxis and roads of Mumbai and Pune. Though most cars in focus have the numbers changed, yet Fiat taxi's and trucks with Indian number plates are all over the place.

Captain:
[after the two men have just watched a man be tortured]
Are you okay?

Captain:
We'll go easy on this next guy. He's a jihadi, spent time in Afghanistan. And he's a police officer.


Telling the truth is generally considered to be the first step on the
path to righteousness. It brings redemption to some and relieves the
guilt of others. Many people have a hard time accepting the truth when
faced with it. That difficulty in dealing is perhaps the main reason
some run far away from the truth altogether. Given how troubling facing
the truth can be in everyday reality, being subjected to it in
celluloid on the big screen is a very hard sell. This is even more
relevant when the film in question is based on an event that was played
out to the point of emotional exhaustion in the media. (Just ask the
producers of UNITED 93.) This is the plight of A MIGHTY HEART, an
adaptation of Mariane Pearl's novel of the same name, about her
experiences during the search for her kidnapped husband, Daniel Pearl,
in the winter of 2002. For director Michael Winterbottom, this is only
the beginning though. Assuming he manages to get people to see the
film, (casting Angelina Jolie in the role or Marian Pearl certainly
doesn't hurt the film's chances), Winterbottom must then get people to
forget that they know how it's all going to end.

Winterbottom is too smart to go against the grain. Instead, he uses the
audience's prior knowledge of the story to incite an even deeper
emotional reaction. He begins by establishing his style. A MIGHTY HEART
is not a documentary but rather a fictionalized reenactment of actual
events that is shot and edited like a documentary. There are no talking
heads but the camera is an active participant in the drama that
unfolds. Hand-held movement, jump cuts and an omnipresent observer's
point of view lend realism to the film's already tense premise. For
those who aren't aware, Jewish-American journalist, Daniel Pearl
(played here by CAPOTE scribe, Dan Futterman) was kidnapped in Pakistan
in January of 2002. The violent act became an international scandal as
the group that claimed responsibility for the crime demanded the
liberation of prisoners from American detainee prison, Guantanamo Bay,
in Cuba. The American government does not give in to the terrorists'
demands. It doesn't end well. The film focuses on the efforts made by
Mariane, the Pakistani police, the C.I.A. and the journalistic
community throughout the search for Daniel. Knowing Daniel doesn't live
through the ordeal and that this search is fruitless may leave the
audience without hope but the dedication and fervor with which the case
is attacked carries enough hope to inspire an overwhelming sympathy
that sinks our hearts when what we know is coming actually comes.

A blustering soundscape and tightly framed street and crowd shots
elevate stress levels to unimagined heights. Mariane is alone in a
foreign country, searching for the most important person in her life.
Knowing the odds are against her, holding on to hope becomes all the
more complicated when she is surrounded by strangers, traffic and the
sounds of incessant honking, cell phones and random farm animals. The
chaos is absolutely inescapable. Yet still, Mariane must remain calm.
After all, she is the heart of this operation. If her heart fails, all
hope is lost and all efforts will fall apart. Jolie exhibits both outer
strength and inner fragility at the same time as Mariane. She is direct
and focused in face of this horrific reality, holding it together for
Daniel, herself and her unborn child but Jolie's distant eyes and
suddenly fidgeted demeanor suggest just how difficult maintaining all
this composure truly is. Being a journalist herself, Mariane's most
endearing quality is perhaps her ability to remain hopeful in spite of
all the horror she has known in her own career without coming across as
naïve. Jolie's balancing act upon such a tightly wound rope is truly
genuine in both its intention and execution.

Any movie entitled A MIGHTY HEART cannot spend all its time entrenched
in fact. After all, there is a delicate, growing love between Daniel
and Mariane that is also being held prisoner. This love though cannot
be held captive and gives life to hope. Their love comes back to
Mariane in flashes throughout her suffering. Insignificant moments like
the last time they saw each other take on new meanings, making the loss
feel larger while still reminding her what she is fighting to find. The
truth behind A MIGHTY HEART is that it takes one to live through
something like this and, more importantly, live past it.