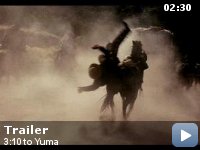 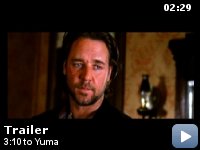 A small-time rancher agrees to hold a captured outlaw who's awaiting a train to go to court in Yuma. A battle of wills ensues as the outlaw tries to psych out the rancher.

Storyline
Rancher Dan Evans heads into Bisbee to clear up issues concerning the sale of his land when he witnesses the closing events of a stagecoach robbery led by famed outlaw Ben Wade. Shortly thereafter, Wade is captured by the law in Bisbee and Evans finds himself one of the escorts who will take Wade to the 3:10 to Yuma train in Contention for the reward of $200. Evans's effort to take Wade to the station is in part an effort to save his land but also part of an inner battle to determine whether he can be more than just a naive rancher in the eyes of his impetuous and gunslinging son William Evans. The transport to Contention is hazardous and filled with ambushes by Indians, pursuits by Wade's vengeful gang and Wade's own conniving and surreptitious demeanor that makes the ride all the more intense.

Taglines:
Time waits for one man

When Russell Crowe was no longer committed to Baz Luhrmann's next film, he actively pursued this film as his next project. James Mangold immediately signed Crowe when Tom Cruise, who was in talks to play Ben Wade, bowed out.

Audio/visual unsynchronized:
During the shootout when Ben and Dan are on a rooftop, before the camera cuts to Ben and Dan, Charlie Prince fires a shot but there is no sound when he shoots.

Alice Evans:
[upon hearing Dan cock his rifle]
Dan… Maybe it's the wind.


I saw this film last night at a preview in the lead up to the Toronto
International Film Festival. Having never been a big western fan (with
a few exceptions – Shane, High Noon, The Wild Bunch) and having been
rather indifferent to Walking The Line, James Mangold's last
directorial effort, my expectations were modest, despite the hype that
the film has received. But I was duly impressed. The action and tension
remain constant throughout but, more importantly, the plot is
compelling and the acting is terrific. No doubt many will be impressed
by Ben Foster's affected performance as Russell Crowe's loyal but
psychopathic sidekick (think Johnny Depp in the Pirate movies) but to
my taste it was much too over the top in a cast that offered a number
of subtle and well thought out performances.


Russell Crowe is brilliant as the arrogant, amoral outlaw Ben Wade and
Christian Bales infuses his role as a beleaguered rancher and Civil War
veteran with just the right mix of pathos and dignity. Iy was wonderful
to see Peter Fonda be given a role in which he was allowed to
demonstrate his genuine talent, much too long hidden away. In my view,
though, it is Logan Lerman who most deserves the accolades that will
certainly come his way. He plays Bales' teenage son who comes of age in
the course of the film. Initially disillusioned with a father whom he
sees as drudge and a failure, he eventually recognizes his father as
the hero he is (or at least becomes).

Cinematically, this film ranks up there with the best westerns of all
time. It is consistently beautiful to watch and captures the expanse
and majesty of the American west as well as any movie I've ever seen.

In many respects this is a traditional western (it is a remake, after
all). They really don't make movies like this much anymore and it will
be interesting to see whether it finds an audience in this era of
dumbed down teen comedies and quirky slices of dysfunctional modern
life. I wish it well.