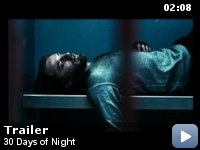 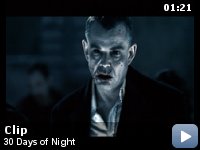 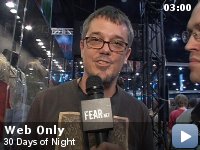 After an Alaskan town is plunged into darkness for a month, it is attacked by a bloodthirsty gang of vampires.

Josh Hartnett did his own stunts, and Melissa George did most of Stella's driving.

Factual errors:
Despite being without sunlight or electricity, most indoor and street scenes appear well-lit.

Very good film for its genre.


I had the opportunity to see this film tonight at a free screening at a
theater in Chelsea, NY with the director David Spade, Melissa George
and Josh Hartnett all present at the screening and I walked in
expecting another run of the mill vampire movie and walked away
pleasantly surprised.


It's no question that over the last 9 years the whole Vampire trend has
been overdone to death. Blade spawned a sudden interest in a subject
that has been around forever but hadn't been refreshed in quite some
time. After Blade, enter Buffy the Vampire Slayer TV series and so on
and so forth until the whole vampire trend had well worn its welcome. A
few years pass and here's yet another vampire story. What makes this
story any different? The graphic novel, 30 Days of Night, put together
by the talented team that worked on Todd McFarlane's stunning
"Hellspawn" series, Steve Niles and Ben Templesmith found a way to do
something creative within the vampire realm, and its completely to do
with premise.

That premise being, vampires being allowed to run amok freely in Alaska
during a 30 day period when there is no sun to force them into
hibernation during the day. Its simple yet fresh enough to maintain my
interest, it's a wonder no one had thought to write this story until
now.

What's important to note is that the story does not go into too much
detail about the leading characters personal lives, nor does it go into
too much detail about the vampires themselves. We don't know how they
came to be and what their philosophy is (besides sucking blood) and
that's a good thing, Its plunged strait into action and this lack of
over characterization, actually helps to strengthen this story.

Despite the Alaska angle the film and the story itself is nothing
really original. Even the vampires themselves are nothing we haven't
seen before. Black trench coats and a mouthful of fangs, speaking in a
foreign tongue with an evil squeal. But it's okay. I've seen it before
but that doesn't mean that it's not going to make the movie any less
entertaining.

Where this movie is successful is in the fact that it's handled in a
very realistic way. Nothing is too over the top, Evan; Josh Hartnett's
character is a believable and very human sheriff. He doesn't do
anything in this movie that doesn't seem plausible, in fact the film
has very little cringe moments and hardy any cheesy dialogue.

But it doesn't take itself too seriously either. It is what it is; an
extremely gory movie about vampires killing people and it's thrilling,
entertaining and put together very well. Its so basic that it works,
not since the Decent had I seen a horror movie that succeeded in this
matter by keeping the story basic and believable and not relying on
cheap tricks to try and thrill the audience. Of course there's the
sudden jump moments, but you don't see Even leaping over dumpsters
shooting off semi-automatic weapons and spurting out one liners.

When it comes to the films performances, the supporting actors do a
good job and the ever dopey and extremely untalented Josh Hartnett whom
I never fail to dislike, in everything he does, somehow seemed almost
likable in this movie and I don't know why, but I did like him in this
roll.

Overall it's a very strong film for its genre, dare I say one of the
best. You simply can't compare it to Citizen Cane, or the Godfather but
for what it is, its very good. If you like graphic novels, liked the
Decent, like horror or sci-fi. Or Vampires. You'll be pleased. Well
worth it for free and if I had played would be satisfied.

Postal
Lars and the Real Girl