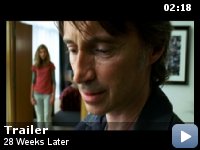 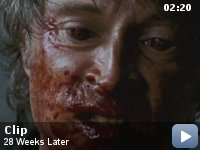 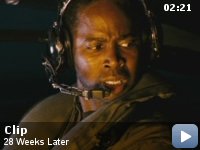 Six months after the rage virus was inflicted on the population of Great Britain, the US Army helps to secure a small area of London for the survivors to repopulate and start again. But not everything goes to plan.

Storyline
In the country nearby London, Don, his wife Alice and a few survivors live hidden in a farmhouse. When infected people break in the house, Don panics and does not help his wife to escape, running away and leaving Alice trapped inside the room. Twenty eight weeks after the outbreak that annihilated the population of Great Britain, London is considered safe and the British survivors return under the coordination of the American Army, that keeps the city under permanent surveillance. The teenager Tammy and her younger brother Andy travel back from Spain to live with their father Don in London. They miss their mother and decide to escape to their old house to retrieve pictures and some other personal belongings. However, they find Alice surprisingly alive and the Army brings her to the base. After some blood test, the biologist Scarlet discovers that Alice is a carrier of the lethal virus and somehow has immunity to it…

According to director Juan Carlos Fresnadillo, composer John Murphy had only two weeks to compose the entire score for the movie.

Donald Harris:
What are you going to cook?

This is a dreadful film, and the reasons why are…

28 Weeks Later has to be the most disappointing sequel I've ever seen.
This review will contain spoilers, however, it's nothing that the
filmmakers themselves haven't spoiled to start with. Let's start with
the most fundamental element of film-making: camera work. 28 Weeks
Later is one of those pretentious films with the epileptic, hand-held
camera that seems so popular with filmmakers who have nothing to
actually say or show in their films. There are precious few scenes
where the camera isn't both hand-held and in constant frenetic motion.
It brings nothing to the film, creates no tension, and brings nothing
new to the art of film-making. There are lengthy scenes that compound
the camera work problem by also being filmed in simulated night vision.
For those of you with a propensity to headaches or vision problems,
this alone makes 28 Weeks Later a film to avoid.


On to the story. This is, sadly, one of those films where stupid people
do stupid things as the only means the filmmakers could think of to
advance a pointless story. **spoilers start** These two kids have just
arrived in the "secure zone" and yet are able to sneak out, past
heavily armed guards, pas various security measures, and run off into
an area they have been repeatedly told is not safe. Armed guards
surround the city. Soldiers are everywhere. Everyone has a machine-gun,
a pistol, night vision goggles… and yet, the discovery of an infected
person, brought into the "secure zone", and absolutely NO precautions
are taken? There are no extra guards; there are no extra security
measures. To make matters even more "logical", it seems that all the
soldiers in the area where this infected person is being kept are all
either idiots, unarmed, or conscientious objectors. There is not one
useful weapon to be found when it would be most useful. A soldier with
a helicopter wants to rescue his buddy, yet the only thing he can think
to do is have them crawl throughout the city to a distant spot to pick
them up? Are there absolutely NO areas closer? This is just a
completely useless gimmick to have the heroes of the story trek across
town. I could go on listing plot holes large enough to float the entire
U.K through, but I trust my warning will be enough to ward off those
who are on the fence about seeing this film or not. Somehow, the kids'
father has survived all the way through these events, despite all
logic. Like the lone zombie in Day of the Dead who has learned to use a
gun and appears to have regained some of his sentience, here we have an
infected who defies all logic, including the internal logic of 28 Days
Later, to follow his children and pop up at convenient moments for
cheap scares and bad melodramatic moments. The filmmakers have created
situations that defy logic and normalcy to advance a completely
pointless story. Characters perform actions that defy logic. Events
happen that defy logic. There is blood everywhere, yet no one seems
worried about infection. And I can assure you, if blood is what you
feel like seeing, this movie's carnage is on the heavy side. I'm not
squeamish, and I actually enjoy a good gory film every once in a while.
The problem with 28 Weeks Later is not the gore. It's the pointlessness
of it all.

I've seen some really bad films in my day. I've actually enjoyed some
of those bad films. The problem with 28 Weeks Later is that it WANTS to
be a great film. It WANTS to be a big budget gore-fest. With completely
unsympathetic characters, it fails to create any bond with the
audience. Even if the epileptic camera work gave us an instant of
respite to actually relate to those characters. We are kept at a
distance by terrible plot devices, terrible character development, and
completely silly events.