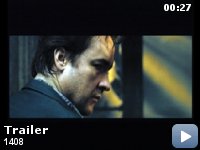 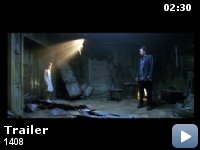 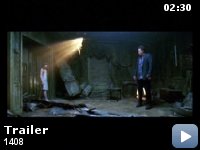 A man who specializes in debunking paranormal occurrences checks into the fabled room 1408 in the Dolphin Hotel. Soon after settling in, he confronts genuine terror.

Storyline
The cynical and skeptical writer Mike Enslin writes books evaluating supernatural phenomena in hotels, graveyards and other haunted places, usually debunking the mystery. While writing his last book, he travels from Los Angeles to New York to spend one night in the evil room 1408 of the Dolphin Hotel, which is permanently unavailable for guests. The reluctant manager Mr. Gerald Olin objects to his request and offers an upgrade, expensive booze and finally the reports relating the death of more than fifty guests along decades in the cursed room. However, Mike threatens Mr. Oiln, promising to sue the hotel, and finally checks in the room. Along the night, he finds that guests of room 1408 can check in when they like, but they can never leave the room alive.

Taglines:
No one lasts more than an hour.

Continuity:
After Mike discovers the turned-down bed (and the neat toilet roll in the bathroom), he switches off the radio. The cognac is perched right on the edge of the table. When he tries figuring out where the maid might be, the cognac has suddenly moved back.

Mike Enslin:
[talk into tape recorder]
Hotels are a naturally creepy place… Just think, how many people have slept in that bed before you? How many of them were sick? How many… died?


I've never seen a horror film quite like 1408–can you even call this
film a "horror"? Well, it's not the horror movie we're used to seeing
in this day and age. The films that are supposed to scare us nowadays
are made from the same recycled junk we've been seeing for years now.
Nonsensical plots are dreamed up just to make use of the exciting range
of CGI. Underdeveloped characters we don't care about are
tortured/murdered by a psycho for no apparent reason. Most of the
intended audience for these movies isn't even scared anymore.


Let me tell you, 1408 is different. Its main intention is not to scare
you (though it undoubtedly will); it wants to tell you a story. It
doesn't start out as a scary movie. John Cusack plays cult writer Mike
Enslin, a man who visits supposed haunted spots in order to debunk
their reputations in the mildly-successful books he writes with titles
such as "10 Nights in Haunted Hotels". When the room 1408 at the
Dolphin Hotel in New York is brought to his attention, research tells
him that the death tally in the room is in the double digits. He sees
the room as a solid ending chapter for the new book he's working on.

The film is based on a Stephen King short story, which I had the
pleasure of reading before I saw the film. While the film does take its
creative liberties, it never forgets where it comes from. Writers Matt
Greenberg, Scott Alexander, and Larry Karazewski seem to be very
well-read on the author, and the movie always feels just like Stephen
King–if you've ever read him, you know what I'm talking about. There
have been times when I've been reading a novel of his and had to tell
myself, "Calm down, it's just a book." There are moments in this film
of such mind-gnawing anxiety, such high-adrenaline terror that I had to
tell myself, "Calm down, it's just a movie." (Note: Stephen King does
recommend the film.)

Director Mikael Håfström never takes his audience's intelligence for
granted. We're never beaten over the head with the same thing; the film
is always headed somewhere new and exciting. The innovative ideas here
are just terrific.

John Cusack is brilliant as the cynical writer with a tragic past. He's
never unbelievable, and he always nails the character down perfectly.
There was never a time when I wasn't rooting for Mike Enslin in 1408.
There was never a time when I did not want him to get out of the room.
Cusack's emotional range is really put into play here, and the casting
could not have been any more dead-on.

Samuel L. Jackson gives a chilling performance as a manager who is
intent on not letting Mike enter room 1408. His determination to
convince Mike not to enter the room only fuels Mike's determination to
enter it. Through him, we pick up on the facts about the room Mike's
research couldn't provide. His warnings give us chill bumps but leave
enough open so that we still don't know what we're in for.

And with room 1408, you never really know what you're in for. Who am I
to ruin it for you? Just know that this is not a mystery. We will not
come to understand why the room is the way it is. There are, of course,
those who will be disappointed by 1408–because when all is said and
done, they will find it's not a movie about a freaky hotel room, but
rather the man who's trapped in that hotel room and what he finds
there.