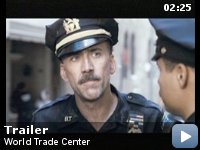 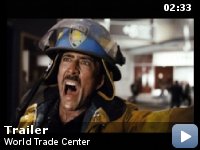 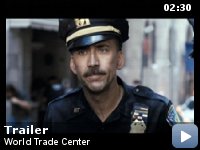 Storyline
On September, 11th 2001, after the terrorist attack to the World Trade Center, the building collapses over the rescue team from the Port Authority Police Department. Will Jimeno and his sergeant John McLoughlin are found alive trapped under the wreckage while the rescue teams fight to save them.

Oliver Stone thought of casting Kevin Costner as Sgt. John McLoughlin, his
JFK lead. Costner had narrated the 2006 documentary
On Native Soil, about the 9/11 Commission Report's investigation of the causes of the terrorist attacks and what could have been done to prevent them from happening. Paramount Pictures was concerned that Stone and Costner would then delve into another conspiracy theory.

Anachronisms:
In the beginning, there is a view of the streets with a crossing sign. However, that type of electronic sign (the one with the hand for "Don't Walk" and the person for "Walk") was not installed until December 2001. At the time of the attacks, the old signs with the words were still in use.

Good intentions and some powerful moments but overall a disappointment


I honestly didn't think it was very good at all, though I respect the
intentions of the filmmakers. Whatever one wants to say about Oliver
Stone, he showed a commitment to faithfully telling the story of these
two Port Authority cops trapped in the wreckage of the World Trade
Center and their worried wives.

I liked a lot of the scenes in the beginning, the little mundane
details like when Michael Pena's character is going about his everyday
street beat. But the scenes at the WTC itself are really awkward,
especially the cross-cutting between real footage and the actors. They
just don't match, neither the film stocks nor the actors' reactions. A
couple of moments with Pena standing there on the concourse were
effective in creating a sense of horrific surrealism, and the moments
right before the collapse were sudden and chilling…but overall it was
not as powerful as I was expecting. For a film called World Trade
Center, I guess I was expecting a little more context and not something
focused so narrowly on these two Port Authority cops and an ex-Marine
from Connecticut (as the only person outside these two cops' families
whose story is told in the film, the focus on him reeks of jingoism in
a GI Joe/Rambo vein).

I know it's a little unfair to compare this to United 93, but I need to
in order to illustrate the point. U93 told a specific story (the
experience of the passengers on the plane) and placed it within a
context (what was happening with air traffic control and the military).
The lessons that are demonstrated in the actions of the passengers are
enhanced by contrasting them with the helplessness of the
"professionals" responsible for their safety. It's telling a
dramatically powerful story, conveying a theme , AND providing a larger
historical context of what happened that day. Oliver Stone, by
comparison, has failed to effectively tie the experiences of these two
trapped cops with the larger events of the day, and his film suffers as
a result. And in the end the film largely shortchanges the stories of
the 2749 families who didn't get good news that day.

OK, so the film focuses on a narrow story of these two trapped cops and
their families (and the gung ho marine, but he has limited screen
time). Was their story well told? The scenes amidst the wreckage were
compelling, but the back-and-forth with their wives became annoyingly
schmaltzy. Yes, Maggie Gyllenhaal gave a strong performance as the
pregnant wife and a lot of the moments with her family (esp the brief
scene with the Colombian mother-in-law praying) were emotionally
poignant, but so much of the family stuff was lame melodrama. And to be
honest, even Maggie's performance was a little generic. I understand
that these characters are all closely based on real life, but it still
felt very Lifetime movie of the week. As for Maria Bello in the role of
the other wife, I loved her in A History of Violence, but she was bland
in this. The kid actors playing her children were mostly awful, and the
film dragged whenever their story was on the screen. The resolution is
mostly handled well, I really like what Oliver Stone is trying to
convey about these small gestures of heroic goodness in the face of
such desolation. But the power of these scenes is undermined by his
tendency to pour on the sappiness while largely ignoring the greater
horror of the day. It feels like a soap opera set against the greatest
tragedy of our age, and that just doesn't work for me.

In short…not intense enough, not enough context, too much melodrama,
not enough of a sense of reverence for what happened, highly impressive
job of recreating the debris field, a charismatic performance from
Maggie, overall a mediocre film.

TagsUSA
The Descent
The Butterfly Effect 2